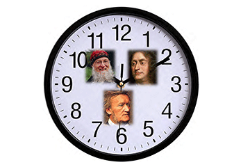 
It’s hard to imagine what a piece of courtly baroque music would have in common with a love score written by the 19th century German composer Richard Wagner, never mind a seminal work of 20th century American minimalism.

Music lovers will get the chance to find out what’s the same about three very different musical compositions during “It’s About Time,” the SUNY Cortland College Community Orchestra’s upcoming holiday concert on Tuesday, Dec. 7.

The orchestra, which is made up of SUNY Cortland students, faculty and staff as well as area community members, will perform at 8 p.m. in the university’s Old Main Brown Auditorium.

The concert will take place without an intermission and with all safety measures in place to allow the orchestra’s first in-person concert since campus COVID-19 safety measures shut them down in Spring 2020.

This year, the holiday concert is being presented in an unusual art-and-music collaboration with Cortland Jr./Sr. High School students taking art teacher Judith Cogan’s Comprehensive Art course. The 9th through 12th graders in Cogan’s class designed, built and will exhibit a collection of suspended mobiles that will relate to the more modern musical selection.

The concert title, “It’s About Time,” covers the connection between all the pieces, said Ubaldo Valli, a lecturer in the Performing Arts Department and conductor for the current, lean 30-piece orchestra.

“The three pieces couldn’t seem more different,” Valli said. “However, they are all doing essentially the same thing, which is why I think the concert is an interesting one.”

In all three offerings, a busy musical foreground overlays a slow, deliberate musical background that anchors each piece.

‘In C’ exemplifies minimalism, a musical genre that originated in the U.S. in the 1960s, according to Wikipedia. By stripping music down to its bare essentials, minimalism focuses on pure sonic power, pulse and the internal processes of the music, without a conventional musical narrative.

“It is easy to think that in the piece a player can just do whatever they want, but it actually requires more individual discipline than playing in a regular orchestra because you have to be very attuned to the pulse that you hear throughout the piece and to what the other people are doing,” Valli said, “If you think that what you do doesn’t matter, you won’t be able to play the piece.”

Not to be confused with purposely atonal music, Riley’s 1964 minimalist piece is nevertheless composed so as to never sound the same way twice.

“It has 52 little snippets of music and there’s a constant pulse of the note “C,” Valli said. “The instructions are that the performers play each snippet for as many repetitions as they want. Each performer might decide to repeat a particular unit a different number of times. The perfect visual analog to that is the mobile.”

“If you can sort of imagine clouds going by and changing colors, that’s another visual analog for how this musical piece moves,” he said. “You look at the music and it looks like a big nothing. Then you look again, and it’s so craftily put together, just really smartly done.”

“My experience in doing this sort of collaboration with high schoolers has been that the students come up with such great solutions,” he said.

Valli encourages the audience to experience the mobiles as fully as they wish.

“I’m going to ask people to stand up and walk around, absolutely. In fact, this is actually a fairly common practice with minimalist music.”

Some four hundred years before Riley’s inspiration, Purcell’s chaconne, that is, a series of chords that repeat over and over and over again, are heard in his masque or semi-opera called “The Fairy Queen (1692),” which is based on “A Midsummer Night’s Dream.”

“There are eight bars that repeat all the way through the piece,” Valli said about Purcell’s music, geared to please a public audience. “It always has this foreground that is very busy while underneath it is moving very, very slowly.”

Fast forward a few hundred years and German composer Wagner was composing “The Siegfried Idyll” for his wife.

“He wrote it in secret,” Valli said. “She woke up on the morning of Dec. 25th hearing the music because Wagner arrayed the musicians on the staircase leading up to her bedroom.

“As with the other selections, there’s all this surface activity, but underneath it’s all moving harmonically really slowly,” he said.