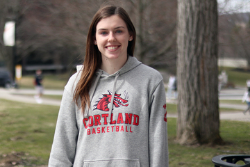 
Like many college students, Alaina Lynch is a fan of the popular Netflix series “Black Mirror.”

She isn’t, however, just staying up late, munching on popcorn and binging a few episodes with her friends. Lynch is doing groundbreaking research that explains how and why “Black Mirror” plays on a generation’s fears of a dystopian future where technology clashes with human morality.

Her presentation, “Imagining Forward: ‘Black Mirror’ and 21st Century Anxieties,” will be part of Transformations: A Student Research and Creativity Conference on Friday, April 12. Lynch’s talk is part of a concurrent session from 3 to 4 p.m. in Sperry Center, Room 104.

“The subject matter is so interesting and anyone who’s watched one episode of ‘Black Mirror’ understands that it’s so mental and it has so much to do with how you think and how you feel about things,” Lynch said. “It’s easy to see how there is so much to talk about by looking at it and looking at the patterns from the four seasons. There is so much information and so much content to be analyzed.”

A dual political science and criminology major from Staten Island, N.Y., Lynch has her sights set on law school after graduation.

Yet it was an introduction to fantasy and science fiction literature course with Associate Professor of English Andrea Harbin that sparked her interest in using “Black Mirror” for her senior thesis.

“Black Mirror” was created by Charlie Brooker in 2011 for British television and was added to the Netflix streaming service in 2016. The phrase “Black Mirror” evokes the reflective surface of cell phones, television screens and computer monitors and the relationship between humanity and technology is one of the show’s major themes.

An anthology series, all 19 of the show’s episodes, which are split over four seasons, have distinct plots and characters. “Black Mirror” often draws comparisons to the “The Twilight Zone” for its twist endings and social commentary.

While there has been much serious academic research into how “The Twilight Zone” fit into the American cultural landscape of the early 1960s and Cold War-era fears of nuclear annihilation, “Black Mirror” has yet to receive similar treatment.

The software allowed Lynch to discover patterns in the dialogue that exposed the show’s thematic content.

“One thing that came out that I didn’t really notice as I was watching it was that helplessness was this huge theme of all the episodes,” Lynch said. “It wasn’t the main theme of any one episode but it was present in all of the episodes and it was the driving force behind all of these anxieties.

“Looking back at ‘The Twilight Zone’ analysis and other sci fi shows, they were based in helplessness, but now it’s completely different,” she said. “The main fear in ‘Black Mirror’ we found was artificial intelligence.”

Curtis had previously worked with Megan Kocijanski ’16 on a 2015 Summer Research Fellowship project on media images of women in prison using another popular television show, “Orange is the New Black,” as a lens.

So she encouraged Lynch to follow her passions and investigate the moral choices faced by characters in “Black Mirror.”

Lynch was not able to include the first full-length “Black Mirror” film, “Bandersnatch,” that was released on Netflix on Dec. 28, 2018. The film was unique in that it allowed the viewer to pick, via remote control, one of two options at multiple points that would affect how the rest of the movie would unfold.

She expects that type of immersive experience to become an even bigger presence in digital storytelling, perhaps confirming some of the fears expressed in previous episodes of “Black Mirror.”

“I think that’s something that’s going to become huge, the choose-your-own-story type,” Lynch said. “Me and my brothers, we were talking about how we could see even if virtual reality gets involved in the future, you can be in the show and actually choose the different endings. I think it will have a lot more to do with choice. In a few of the “Black Mirror” episodes, that’s one of the thing people are scared of, having choice over technology.”

Transformations will be Lynch’s opportunity to share her findings with SUNY Cortland faculty and students. It won’t, however, be her first presentation on this topic. She spoke at the Eastern Sociological Society’s annual meeting in Boston, Mass., earlier this year.

Lynch will soon leave SUNY Cortland for law school but she was glad to have the chance to do unique research as an undergraduate.

“It’s nice for me to be doing something outside of political science,” Lynch said. “It’s not statistics. It’s not law. It’s still research. I’ve learned all about this software I wouldn’t have used otherwise. I liked the idea that it was something fictional, which is something I really never deal with in political science.”