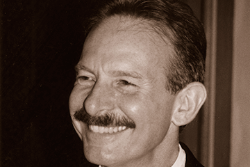 
The late Peter A. DiNardo ’68 earned one of SUNY Cortland’s highest alumni honors this past March when he was inducted in the College’s Academic Hall of Fame.

His teaching legacy, however, will live on at his alma mater in the form of a faculty research award named for the widely respected clinical psychologist and his wife, which will be formally celebrated for the first time Wednesday, Sept. 16.

Donna West, a SUNY Cortland professor of Spanish and linguistics, is the inaugural recipient of the Dr. Peter A. DiNardo ’68 and Judith Waring Outstanding Achievement in Research Award.

She will give an address, “Action Habit to Cultivate the Guessing Instinct: Peirce’s Pragmaticist Dimension,” at 6 p.m. in the Old Main Colloquium. The hour-long talk is free and open to the public.

West will discuss her research as it intersects with the intellectual movement advanced by Charles Sanders Peirce, who lived from 1839 to 1914.

West is the author of numerous articles and book chapters on Peirce.

This American philosopher, logician, mathematician, and scientist is sometimes known as “the father of pragmatism.” He was at the center of the debate among logical positivists and proponents of philosophy of language that dominated 20th century Western philosophy.

West, who has master’s and doctoral degrees in linguistics from Cornell University, has a bachelor’s degree in Spanish from Roanoke University. She joined the College in 2004 as an assistant professor and was promoted to professor in 2015. She teaches undergraduate Spanish courses in Beginning and Intermediate Spanish, Advanced Conversation, Advanced Composition, Linguistics, Advanced Grammar and Cinema; and graduate courses in Linguistics, Language Pedagogy, and First and Second Language Acquisition.

The new award and annual lecture are a suitable way to carry on DiNardo’s legacy.

“Dr. DiNardo believed strongly that the best faculty research experiences often take professors out of their classrooms and into the communities that they serve,” said Jill Mirabito, major and planned giving officer for the Cortland College Foundation. “He believed that the benefits of research are endless and they should be shared among everyone — students, faculty members, community members and anyone else in between.”

In 2014, Waring endowed the $1,000 award to be given annually to a SUNY Cortland faculty member for research conducted outside the classroom. A component of the honor is that the recipients present a lecture about their work as a way for both the campus and the local community to learn more about what is taking place on campus.

Psychology professionals continue to use the methods that DiNardo developed to diagnose certain psychological disorders, and now SUNY Cortland faculty members will join them, thanks to his lifelong penchant for learning and academic excellence.