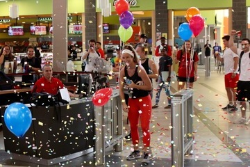 
Arianna Judge got in line to swipe her I.D. card at the Student Life Center around 1 p.m. on Tuesday, Oct. 9.

It was just part of her normal routine. Go to class. Get a bite to eat. Blow off some steam running around the track.

Members of SUNY Cortland’s Recreational Sports staff presented Judge with a certificate for being the lucky user.

Judge tries to encourage her roommates and friends to tag along for workouts and she also sends clips to family members, showing off all that the Student Life Center offers.

“When I came in here for the first time, it caught my eye. I was like, ‘Wow,’” she said. “I remember taking videos to send to my brothers and my parents, ‘Look at this, it’s so cool.’”

An average of 2,000 people, approximately one-third of the student body, use the Student Life Center every day to lift weights, run, swim and engage in activities such as yoga, meditation and group exercise classes. Roughly half a million people have also toured the facility since it opened.

The facility has been recognized by a number of national publications. Athletic Business named it its facility of the week earlier this year and Campus Rec named it its “Rec of the Month” in 2017.

“I think we’re doing a lot of good for the campus,” said Julian Wright, director of recreational sports. “To have a facility like this and have our students doing clean, healthy and wholesome things, it’s having a significant and positive impact on the campus.”

Judge will help the Student Life Center push toward 2,000,000 users during her remaining time on campus. She said she uses it about three times a week.

“I try to get my friends and roommates to come as much as I do,” she said. “Sometimes they don’t want to come so I come by myself as well. It’s a good place to ease your mind and get away from schoolwork.”