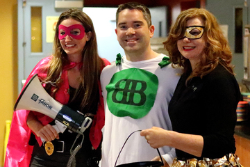 Investigator Amanda Wasson from Cortland UPD, Eric Schisler ’18, sexual violence prevention educator from the Cortland YWCA’s Aid to Victims of Violence and Jena Nicols Curtis, professor of health and director of the Center for Gender and Intercultural Studies, work together on Cortland’s It’s On Us Action Team.

Part of a campus-wide committee to prevent sexual violence, the team visited dining halls and other public areas between 11 a.m. and 2 p.m. on Halloween to spread information and awareness about sexual violence prevention.

All three donned costumes and developed monikers. Wasson was “Captain Communication,” reminding students on how to verbalize consent. Schisler was “Bystander Boy,” and spoke to students about how to step up and stop friends, acquaintances and strangers from taking action that could make themselves perpetrators. Curtis was “Magma,” wearing a skirt made from condoms and handing out condoms to students from a Halloween pumpkin.

The It’s On Us Action Team is charged with bringing together individuals and resources from the campus and local community to collaborate on educational efforts designed to increase the awareness of sexual assault, domestic violence and stalking prevention. The committee also assists with organizing and documenting the university’s programming efforts. During October, the team collaborated with community organizations, academic departments, and student clubs for programming and events in support of National Domestic Violence Awareness month.

Nationally, rates of campus sexual violence increase during Halloween, homecoming, and other holidays or events associated with parties and alcohol consumption. Wasson, Schisler and Curtis hope that, by donning their capes on campus, they can remind students that everyone — from superhero to mild-mannered citizen — has a role to play in sexual violence prevention.