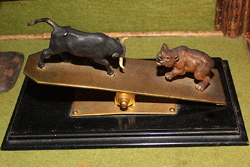 The students with a variety of majors flew drones, interviewed residents of a tiny Adirondack community, toured historical attractions, explored a pristine lake by boat and climbed one of the Adirondack peaks in order to create a sustainable tourism development plan as part of a unique, multi-disciplinary summer course.

As they neared the end of the two-week class, the group thought they had found an answer to help man and nature alike in the largest protected area in the United States: flying frogs.

No, they hadn’t discovered a new species of airborne amphibian.

Flying Frogs is the name they came up with for their plan to develop modern transportation to key park sites, greatly extending visit potential to people from a wider range of incomes while vastly reducing the pollution footprint of the current automobile-focused system.

“The idea for the proposal for our grant is to study advanced transportation systems; specifically high-speed rail, and how they could impact the Adirondacks,” said Mike Schmidt, a business economics major from Syracuse, N.Y.

“We thought, ‘High speed rail is a way to connect residents from both New York City and Montreal to the Adirondacks,’ he said. “Ten to 15 years ago, there was a proposal for that but it didn’t go anywhere. But it would make the Adirondacks accessible to people who weren’t either wealthy or retiring. It would give them a chance to use the space, to enjoy it.”

Many prominent figures have tried in vain to solve the Adirondack Park’s myriad problems. As the massive park in northern New York attempts to rein in overdevelopment and inappropriate uses, many year-round working residents and small shopkeepers struggle financially to continue living and raising their families there.

Whether the seven students enrolled in SUNY Cortland’s blended special topics course on political economy, environmental geography, tourism and economic development in the Adirondacks succeed in finding a realistic solution may not be as important as the intellectual journey they take to get there.

The course, based at the William H. Parks Family Center for Environmental and Outdoor Education, the College’s educational camp on Raquette Lake, required the students to pull together lessons in economics, geography and history and apply them to a real-world situations.

The approximately two-week class runs from June 11 to June 26, starting with an online component, followed by the field experience to Raquette Lake and concluding with the team of students collaborating remotely to finish their joint written report after they return home.

On Sunday, June 16, students majoring in economics, GIS, history, conservation biology and childhood/early childhood education traveled to Raquette Lake — in some cases leaving summer jobs — to meet for the first time at their base camp, William H. Parks Family Center for Environmental and Outdoor Education, Antlers. Through the following Thursday, the class shuttled between Antlers and the College’s second campus on Raquette Lake, Camp Huntington, with brief forays to the tiny Adirondack community of Inlet as well as the Adirondack Experience, the museum on Blue Mountain Lake, to drink in the local history and today’s natural and man-made surroundings.

The key reading material for the course was by noted Adirondack development author and historian Phil Terrie, who was scheduled to give a guest lecture to the students on Monday but was forced to cancel.

Along the way, the group spent a morning experimenting with a fleet of small training drones offering the potential to capture digital images of the region’s current economic and environmental geography, for the sake of future comparison with historical aerial maps. They spent time surveying the tourist community of Inlet, population roughly 300. The five male and two female students were treated to an historical tour with a distinctively economic twist of Camp Pine Knot, the world’s first example of Adirondack Great Camp architecture and an official National Landmark site on the Camp Huntington peninsula. The survey of Adirondack resort development continued with a boat tour around the entire lake provided by Deborah Faylo Kennedy ’87, assistant director of the Parks Family Outdoor Center.

Another day, the seven scrambled up Bald Mountain (Rondaxe Mountain) and its fire tower to sample what has attracted hordes of park visitors since the early days of the last century. A few students joined Badurek for a kayak trip around the lake to tour development sites along the shoreline. They also were offered an opportunity to try the College’s extensive challenge courses — including trust-building exercises on a low ropes course and a confidence building exercise on a high ropes — as a means to break down the barriers to working closely together as a team on one project.

“Being in the Adirondacks made the class more engaging than if it were simply bookwork,” said one student, Laura Herrling, a senior GIS major from Elbridge, N.Y. “Standing on top of Bald Mountain and walking through Camp Huntington gave everyone in the group more hands-on knowledge about what we were learning.”

The evening before the field experience wrapped up, Badurek, an associate professor of geography who specializes in geographic information systems (GIS), helped class members tap the data sources in the web mapping system on the ages of the working people outside of their focus area of Inlet and a comparison of how much they earn when living within a 10-, 20- or 30-minute drive outside the village.

“This data science approach is based on numbers, maps, and graphs that can be used to tell a story about who lives in the region and what their economic opportunities are,” Badurek told the students. He encouraged them to use as much data as possible to come up with their plan.

The following morning, the students unveiled “Flying Frogs” to their three faculty mentors.

“We got so fed up that most of the ideas written on the white board were about ways to deal with the bugs,” Herrling said. “The funniest was an idea to have drones carry frogs around to eat the black flies that kept swarming around our faces. We ended up ‘presenting’ that idea to our professors keeping semi-serious faces before we presented our real problem and solution.”

One idea the team suggested was to sink a portion of the railroad bed, which would serve to preserve wildlife.

“We talked about what potential routes are using GIS and came up with a few different proposals for how we could do it,” Schmidt said. “Laura (Herrling) brought up a really good idea, to run it through places that aren’t developed. We should avoid places like Lake George that are overdeveloped.”

“I’m not that familiar anymore with the geological landscape for the best route to develop but we would have to look at that,” Herrling said.

“We could look for the poorer regions that are just in need of an influx of money,” Herrling said. “Then Julia (Soroka, childhood/early childhood major from Freeville, N.Y.) also had the wonderful idea that we could do transportation from those key areas to hot spots like Old Forge or Lake Placid so that way you don’t have people with a lot of money complain that this is a NIMBY, ‘not in my backyard,’ and we have other alternatives. We were brainstorming, for example, electric cars or better emissions systems to bring down the traffic and the emissions from different vehicles up here.”

Another theme the group suggested is that, once they bring more people to the area, regional or local councils could be formed to decide how to use the space in a more sustainable way, for example, to limit smog emissions in order to encourage the adoption of electric vehicles.

“The bullet trains are magnetic, so there’s no steam, no smoke from that,” Herrling noted.

“We should look at other countries that use high speed rail,” Schmidt said. “How it affected urban and rural populations. We would look at both. Did it make their lives better? Or worse? Things of that nature.”

Herrling later reflected on the advantages of the course’s field experience aspect.

“Working in a group can be intimidating and this was the largest group I’ve worked with so far,” she said. “It took me out of my comfort zone having to communicate much more than I would have when working in a small group. Being a GIS major, it was a bit confusing at first to be working with economics majors. It really pushed me to try harder to understand others’ perspectives.”

The class members have until June 26 to produce a 2.5 page, jointly written grant proposal summarizing their plan to improve economic opportunity in the Adirondacks.

Students who haven’t graduated before next spring may submit applications to give a presentation or poster session at the annual student research and creativity conference, Transformations, on the report, according to Wilson. The students were also encouraged to present their GIS work at the New York State GIS Conference in September. The three educators will consider applying for a federal grant to support more formal research with the potential to make “Flying Frogs” a reality as an economic blueprint for the Adirondacks as well as similar American communities situated within large parks.

“This experience has helped me learn that future group projects will be easier to work through the sooner the ice is broken in the group,” Herrling said. “The more we talked to each other in general, the easier it became to work collectively on our project.

“I have camped in the Adirondacks before while out hunting for garnet,” she said. “This was the first time I’ve ever stayed in a lodge, though. It was different to be staying with more people all in one building, but it helped us get to know each other and was a lot of fun.”