Literary Voices to Speak During Fall 2017 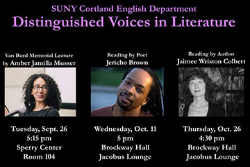 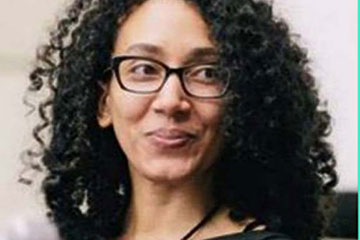 Her talk opens the English Department’s Fall 2017 Distinguished Voices in Literature series, which brings poets, fiction writers, essayists and scholars to campus for readings and lectures. Featuring both established and emerging writers and speakers, the series this fall showcases three outstanding voices in contemporary literature.

Musser’s monograph, Sensational Flesh: Race, Power, and Masochism (NYU Press, 2014), uses masochism as a lens to theorize different felt relationships to power. Musser also has published widely on race and critical theory, queer femininities and race, race and sexuality, and queer of color critique. Her current research project, “Brown Jouissance: Feminine Imaginings,” uses the aesthetic labors of women of color to re-imagine epistemologies of sexuality so that they focus on brown femininity. She has an M.S. in women’s studies from Oxford University and received her Ph.D. in history of science from Harvard University.

Noted poet Jericho Brown will read from his work on Wednesday, Oct. 11. Brown, an associate professor of English and creative writing at Emory University, will begin at 5 p.m. in Brockway Hall Jacobus Lounge.

Brown is the recipient of a Whiting Writers’ Award and fellowships from the John Simon Guggenheim Foundation, the Radcliffe Institute for Advanced Study at Harvard University, and the National Endowment for the Arts. His first book, Please (New Issues 2008), won the American Book Award. His second book, The New Testament (Copper Canyon 2014), won the Anisfield-Wolf Book Award and was named one of the best of the year by Library Journal, Coldfront, and the Academy of American Poets. His poems have appeared in The New York Times, The New Yorker, The New Republic, Buzzfeed and The Pushcart Prize Anthology.

Award-winning author Jaimee Wriston Colbert will read from her work on Thursday, Oct. 26. Colbert, who won a gold medal in the Independent Publisher Awards for her Dream Lives of Butterflies, will begin at 4 p.m. in Brockway Hall Jacobus Lounge.

Colbert is professor of English and creative writing at Binghamton University. Her work, Climbing the God Tree, captured the Willa Cather Fiction Prize. Her book Shark Girls was a finalist for the USA Book News Best Books of 2010 Awards and Sex, Salvation, and the Automobile achieved the Zephyr Prize. Colbert also wrote the linked story collection Wild Things. Her work has appeared in many journals, including The Gettysburg Review, New Letters, Prairie Schooner and TriQuarterly, and has been broadcast on “Selected Shorts.”

The Burd Lecture is named for Melvin Van Akin Burd, the College’s first SUNY Distinguished Professor, a noted John Ruskin scholar who served the College from 1951 to 1979.