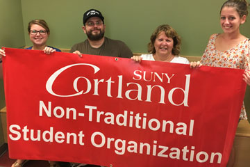 
The five scholars honored during SUNY Cortland’s annual Non-Trad Week from Nov. 11 through Nov. 18 all serve as perfect examples of how such students are anything but traditional.

Most of these students took a roundabout route to higher education but now show a dedication that inspires classmates.

Each of the College’s approximately 300 non-traditional students has a unique, and usually compelling, story.

For example, Heather Jones, a classically trained soprano, is singing the praises of SUNY Cortland as she earns a degree in childhood and early childhood education while minoring in music and concentrating in humanities. Outside her major, the 32-year-old is taking music courses and professional voice lessons. Her ultimate goal is to connect with youths and adults through the beautiful sounds she can make in their ears.

The skating rink is Tamara Shannon’s classroom. She roller-skates, coaches and trains others with a competitive roller derby team in Ithaca, N.Y. Drawing on her academic background of helping people with chemical dependency, Shannon is actually weaving her skate coaching ambitions and credentials into her therapeutic recreation major at SUNY Cortland. The 45-year-old also is raising a pre-teen and a teenager and is recently remarried.

Eli Feathers, 35, is a senior exercise science major living in Truxton, N.Y., who balances duties as husband and parent of four children, including two stepchildren, with a keen ambition to excel as a physical therapist helping clients overcoming daunting rehabilitation obstacles.

At 25, T.J. Keegan stands out for his daily formal suit-and-tie attire. Originally planning to study medicine, he’s embraced his second career choice, the study of law, as a political science major, with a zest that touches the entire campus community. Notably, he organized many events designed to prepare students of all political stripes to participate as citizens in the recent presidential elections.

Ten years ago, Lei Chen was a typical foreign exchange student spending a year at a Cazenovia High School. Now 29, Chen has returned to upstate New York to earn a degree in English as a second language and in so doing help support his mother and brother living back home in China. He embraces a second family in America.

Nationwide, non-traditional college students — defined as students older than 23, students raising children, students working full time, students with prior military experience or students who have an interruption in their education – make up an increasingly large segment of campus populations, according to Cheryl Hines, coordinator of student outreach and non-traditional student support.

That’s why SUNY Cortland took the past week to recognize and celebrate these dedicated students.