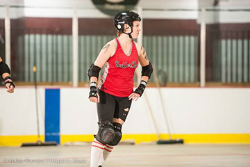 
Tamara Shannon is the kind of college student who flies out to Portland, Ore., mid-semester to see an international-level roller derby competition.
Which is to say she’s the dedicated kind.
You see, the roller skating rink isn’t just about rowdy, big-girl fun for Shannon, although jockeying for the most laps against the Port City Bluestockings team or the Lansing Derby Vixens at Cass Park Rink in Ithaca, N.Y., is a big part of her life.
A player, coach and trainer with the Ithaca League of Women Rollers (known to competitors as the ‘SufferJets’) for the last 10 years, the SUNY Cortland senior therapeutic recreation major plans to incorporate the sport into her ultimate career goal to help people with chemical dependency gain the well-being and self-confidence to master their addiction.

“I’ve been coaching and training new skaters and really seeing what happens,” said Shannon, who at 45 numbers among the College’s approximately 300 nontraditional students.
“When women walk in the door they’re scared and nervous and not feeling confident,” Shannon said. “They’re leery about what’s coming up. Before you know it, you see an amazing transformation. They’re not just stronger but more powerful. They take up more space in the world.”
As head of the SufferJets’ training department, she aspires to align their performance level with the superb teams she traveled to see from Nov. 6 to 7 during the 2016 International Women’s Flat Track Derby Association championship competition.
“We are in Division II, we’re not there yet,” Shannon said of her Oregon foray into the big leagues. “The top 10 teams in the world were there competing for first place. But we’re still doing pretty well. We’re 72nd in the whole world and that’s pretty cool. Not bad for a little Ithaca team.”
Shannon, who earned an Associate in Chemical Dependency Counseling from Tompkins Cortland Community College in 2015, sets the bar high for herself and her team. She is convinced that the same approach can energize people whose lives are marred by drug, alcohol or mental health issues or by run-ins with the law. She hopes to begin a career in either therapeutic recreation or behavioral health.
“It’s something that’s pushed me toward therapeutic recreation, just seeing the change it makes in their life,” Shannon said. “It’s about finding new power in your body, finding your skills, meeting new people.”
Perhaps it’s because her life has taken so many different turns that she has such self-assurance now. Even Shannon’s early career hinted at her altruistic path. A native of Grand Rapids, Minn., after high school graduation in the late 1990s she interned with the District Attorney’s Office in Minneapolis as an advocate for juvenile victim witnesses.
Shannon then moved to New York City just to taste Lower East Side Manhattan life. A few years later, in Tennessee, she was employed as a veterinary technician with an animal hospital and became licensed in masonry after training through the Tennessee Technology Center in Morristown. She also was a lactation consultant, having given birth during this period to Jack, now 14, and Hazel, now 12. She returned to New York state in 1998.
“When I moved back to New York, I was working fulltime as a daytime manager at a local food store,” Shannon said. “But I didn’t want to do customer service for the rest of my life. So I thought, ‘Why don’t I just go back to school?’”
She was north of 40 when she took her seat in a college classroom. Like many nontraditional students, Shannon drives a long way to classes, from Genoa, N.Y. Her household now numbers four, as she recently remarried, to Jessie Shannon.
“Since I’ve been here again, I helped start a food pantry in Ithaca, N.Y., for the home schooling community,” Shannon said.
She believes her chemical dependency counseling qualifications will only enhance the value of her eventual degree in therapeutic recreation.
“I can’t imagine a better combination for what I’m hoping to be working in,” Shannon said. “It’s another tool in the toolbox.”
After one more semester of coursework, she will embark on a full-time, semester long therapeutic recreation internship. Possibilities include Crouse Hospital’s chemical dependency treatment services or the New York State Office of Mental Health’s Hutchings Psychiatric Center, both located in Syracuse, N.Y., or with behavioral health services at Cayuga Medical Center in Ithaca, N.Y.
Between SUNY Cortland and TC3, she has completed five internships already: separate internships for crisis centers in Ithaca and Cortland; the Cortland Youth Bureau; the J.M. Murray Center; and a local LBGTQ organization.
“Ideally I would love to work with women in the justice system as a certified therapeutic recreation specialist,” she said.
In all likelihood, when that first job materializes she’ll be there with skates on. And maybe someday her team will trade blocks and attitude in a rink with the Rose City Rollers of Portland, Ore., or New York City’s Gotham Roller Girls.

Shannon is one of SUNY Cortland’s approximately 300 undergraduate students who is 24 or older, according to Cheryl Hines, coordinator of student outreach and non-traditional student support.

Nationally, non-trads are defined as students older than 23, students raising children, students working full time, students with prior military experience or students who have an interruption in their education. And they make up an increasingly large segment of campus populations. These students often take unique paths to realize their academic goals and achieve their degrees after overcoming obstacles that traditional, right-out-of-high-school students don’t usually face.

Shannon is another reason why SUNY Cortland recognizes and celebrates these dedicated students during Non-Trad Week, which started on Veteran’s Day, Nov. 11, and runs through Friday, Nov. 18.

Non-Trad Week events include family activities, a specially tailored scholarship session, a free taco bar and a “Non-Trads Rock” T-shirt day, when anyone spotted wearing that signature shirt will win a prize. A full list of activities is available.

The College has publicly recognized four other notable non-trads during the week and their stories appear on the College's news pages. You can nominate someone for recognition.