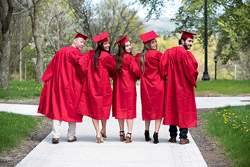 
During SUNY Cortland’s 2019 Commencement, the families of graduating seniors will be seeing red.

Marking the College’s Sesquicentennial Celebration year, undergraduate degree candidates will march in brilliant red regalia — a first in the institution’s history — during the three undergraduate ceremonies to be held on Saturday, May 18.

Students participating in the graduate Commencement ceremony on Friday, May 17, will wear traditional black caps and gowns.

This year, SUNY Cortland replaced a first-come, first-served online ticketing system with a new format for its three undergraduate Commencement ceremonies. The new system assigned students to specific ceremonies based upon their academic department. Students planning to participate in the event should visit SUNY Cortland’s Commencement web page to learn which ceremony their academic department has been assigned.

Two open receptions honoring new graduates will be held in Lusk Field House from 11:30 a.m. to 1 p.m. and from 4 to 5:30 p.m. Students and guests may attend either of these receptions.

Of the 10 most popular majors at SUNY Cortland, the School of Professional Studies this year claimed the three most popular with exercise science, sport management and physical education boasting 153, 140 and 138 degree candidates, respectively. The School of Arts and Sciences took fourth as well as sixth through ninth place for prospective graduates in business economics (131), communication studies (119), psychology (76), criminology (72) and biology (60). Early childhood and childhood education remains the most coveted major in the School of Education with 129 planned graduates, the fifth most sought-after degree program at Cortland.

The College also will award 201 master’s degrees and 22 Certificates of Advanced Study.

“Commencement marks a moment when our students, their families and our faculty and staff pause to reflect with pride on what together they have achieved,” College President Erik J. Bitterbaum said. “As they have for the last century and a half, our new graduates will leave this ceremony to achieve great things in whatever they choose to pursue.”

The first undergraduate ceremony will feature Ann Cody as Commencement speaker. Cody, who grew up in Groton, N.Y., is a medal-winning, three-time Paralympic athlete and internationally respected advocate for the rights of people with disabilities. She currently serves as a senior foreign affairs officer in the U.S. State Department.

The afternoon undergraduate ceremony will feature both Christopher Ashley and Donna Videto as Commencement speakers. Ashley is a Tony Award-winning Broadway director who built his successful off-Broadway and regional theater, television and film career on a foundation formed at the SUNY Cortland campus. His father, the late Larry Ashley, was a SUNY Cortland philosophy professor emeritus. Videto, a nationally respected professor in SUNY Cortland's Health Department, is a 2013 Chancellor's Award for Excellence recipient.

Both Cody and Ashley will receive an honorary doctor of humane letters from the College during the ceremonies.

The evening undergraduate ceremony will feature as Commencement speaker Henry Steck, a SUNY Cortland political science professor emeritus and SUNY Distinguished Service Professor. Steck taught at Cortland for more than 50 years. At the time of his retirement, Steck was the longest-serving educator in the 64-campus SUNY system.

During Commencement, three SUNY Cortland faculty and staff members will receive Chancellor’s Awards, made by SUNY Administration to recognize consistently superior achievement and excellence by faculty and staff within the 64-campus system.

SUNY Cortland’s honorees will be:

Also during undergraduate Commencement, Tiantian Zheng, a professor in SUNY Cortland’s Sociology and Anthropology Department and a globally respected expert on human trafficking and sex issues in modern China, will accept the SUNY rank promotion to Distinguished Professor.

Titilayo Morgan ’99, president of the SUNY Cortland Alumni Association Board of Directors, will welcome SUNY Cortland’s newest graduates into the ranks of the College’s alumni, who live in all 50U.S. states and40 countries. SUNY Cortland has graduated more than 80,000 alumni.

For more information including on tickets and overflow parking and video livestreaming of the ceremony, visit the 2019 Commencement Ceremonies website or contact Special Events Coordinator Samantha Howell at 607-753-5453 or Special Events Assistant Susan Vleck at 607-753-2377.