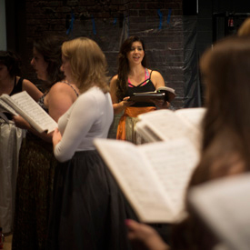 
Call it déjà vu with a difference.

When the musical “Brigadoon” returns to the Dowd Fine Arts Center Theatre Friday, Oct. 24, members of the 1967 cast and crew who inaugurated the stage of what was then a new campus cultural complex will be in the audience. Once again, they will be helping SUNY Cortland celebrate a special performance in Dowd Fine Arts Center.

In this case, “Brigadoon,” a 1940s Broadway classic about a mythical, magical village in the Scottish Highlands, is officially re-opening the beautifully rebuilt theatre after more than two years of extensive renovations.

Alumni who helped stage the original production 47 years ago have been invited back for the musical’s return.

In addition to watching the performance from a modern, acoustically improved theater, audience members who saw the original show will notice several other differences. The main one is that there will be about half as many performers on stage.

A big reason for the reduction is that many of the student performers are enrolled in the College’s 10-year-old musical theatre program. As such, they are able to carry both the singing and dancing roles. Forty-seven years ago, these skills were performed by different people in separate roles. The cast was filled with people from a wide variety of majors, not primarily students working toward a career in performance.

“In contemporary theatre the singing chorus and dancing chorus (of the original production) is a very rare thing,” said Kevin Halpin, the director and choreographer for the show. “For us, this is a musical theatre program full of students whose goal is to do this professionally so it is important that they are well rounded as singers, dancers and actors.

“The style of performance has changed a lot,” said Halpin, an associate professor of performing arts at SUNY Cortland. “Their acting level and the physical characterizations are a lot more demanding than in the 1960s.”

And, 50 years after the first production, the music and lyrics of Alan Jay Lerner and Frederick Loewe will meet with a very different audience.

“When they staged ‘Brigadoon’ here the last time it was in the early years of pop music and there still would have been a lot of students who had not separated from the more traditional music,” Halpin said. “They would have known the music. This time we have to introduce the songs to a new audience that isn’t familiar with it.”

Student dance captains will help the new cast learn the choreography of a bygone era. And, thanks to he renovated seating in the theater; all “Brigadoon” patrons will have a good seat to watch it from.

The very long, single row “continental” style aisles have been replaced with a new configuration of three sections and four aisles. It’s a safer design from a fire safety standpoint, Halpin noted. The improved accessibility of the layout meant that fewer exit doors were necessary. That, in turn, helped create the hall’s improved acoustics.

Patrons who have difficulty with mobility also will like the new seating. Select seats can be removed altogether to make space for a manual or motorized wheelchair.

Speaking of seats, audience members might want to check the armrest of their chair for the names of alumni and friends who took advantage of SUNY Cortland’s buy-a-seat fundraising effort. Many seats remain available for naming. Anyone interested in becoming a permanent part of the new theater should contact the College’s Division for Institutional Advancement.

The more contemporary, spectacular lighting will enhance the set illumination by Joel Pape, the College’s lighting and sound designer. And the new surroundings are a fitting curtain call for Howard Lindh, who subsequently retires following many years as set designer.

Tickets are $18 for general admission; $15 for faculty, staff and senior citizens; and $8 for students or children. Tickets may be purchased in advance at the Bling Store, 101 Main St. in downtown Cortland or at the theater box office starting one hour before the performance. For more information on "Brigadoon" or other productions, visit the Performing Arts Department website or call 607-753-2811.