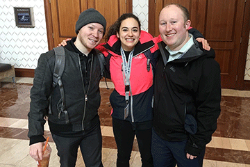 They took turns as chief of SUNY Cortland Emergency Medical Services (SCEMS) while they were students at SUNY Cortland, years when the volunteer agency more than quintupled in size and was named the New York State EMS Council’s 2012 Agency of the Year.

Not surprisingly, the trio of especially close friends changed career course and now dedicate their lives to rescuing people. All three find the challenge of a lifetime while America is gripped by a 100-year catastrophe in the form of the COVID-19 pandemic.

Since 2018, Green has worked as director of engagement at Epicenter Innovation, an emergency management consulting company that recently relocated from Rochester, N.Y., to Denver, Colorado. On the cutting edge of emergency management and consulting, the company offers everything from a robust deployment support unit to technical subject matter expertise to support an organization.

“We are applying new methodologies to change the way (customers) approach these disasters in a more effective and long-term way, that usually graduate ourselves out of a job, which is great!” Green said. “We always leave the client more empowered than we found them.”

He now advises private and public clients responding to the pandemic across the United States. He also serves as an adjunct professor for the Emergency and Disaster Management program at the Metropolitan College of New York.

“My work in social media, technology, and innovation ended up being the backbone of my work in emergency management,” said Green, from Washington, D.C., where he was working with a government client in the midst of the viral outbreak.

“That was during the rise of social media, and I immediately pivoted my interest to how that was impacting the way we communicate,” he said. “At the same time I was interested in EMS and wanted to explore how the two worked together.”

Jolliff currently serves as an emergency manager for the Federal Emergency Management Agency (FEMA) residing in Vienna, Virginia, and traveling the country to help with disaster relief projects as they arise.

For the last year, he has served as training lead for the agency’s web-based crisis management system, which tracks all its federally declared disasters and is used to develop incident action reports, order and track resources and maintain situational awareness on all federally declared disasters including COVID-19. He has delivered the virtual instruction to more than 1,100 FEMA, federal Interagency and state personnel who use the system.

Jolliff also has volunteered for five years as an emergency medical technician in Vienna, Fairfax County, Virginia. The EMS lieutenant is lead planner for the multi-agency coordination of fire and rescue efforts at Celebrate Fairfax, Fairfax’s annual county fair.

He decided to do more and has helped the Shenandoah Mountain rescue group look for several lost or injured individuals in the backcountry.

“I wanted to get some experience being on a search team, not necessarily in any management role, just that first-hand, boots on the ground, search and rescue effort,” Jolliff added.

“I realized I handled these situations very well and it was something that I might be interested in.”

His SCEMS experience ultimately led him to work for FEMA because, upon graduation, he immediately volunteered as an AmeriCorps National Civilian Community Corps (NCCC) FEMA Corps team leader working to support multiple FEMA declared disasters. He joined FEMA full-time in 2014.

Today, Glickman is a police officer with the New York City Police Department and a volunteer public information officer with his fire department back in his hometown on Long Island.

Recently, as a patrol officer Glickman found himself in the middle of dealing with the COVID-19 pandemic, answering emergency calls to rescue sick individuals at their homes in Harlem and West Harlem, among the hardest hit areas. He’s seen a lot of death recently.

“It’s changed,” he said. “It’s finally on the downward curve.”

On behalf of New York state or private hospital systems, he has served as a site safety officer at virus screening clinics.

In his free time, Glickman annually arranges the Law Enforcement Officers Weekend Inc., an annual police personnel social group’s respite weekend during May in Lake George, N.Y. He takes pride in having founded the volunteer organization while still in his 20s.

The pandemic led to the event being postponed, but since April the group’s outreach work has continued with a LEOs Leading LEOs program delivering hot meals to stretched-thin law enforcement officers in 32 different departments.

Glickman said of his gravitation toward the law enforcement field, “Although we were students we were still looked on as colleagues by the University Police Department.”

The SCEMS members formed lasting bonds over the long hours together awaiting the next adrenaline rush of applying their training and capability to handle whatever arose.

“SCEMS just seemed like a really, really friendly organization,” Green said. “I could jump right in. I always feel a need to fix things.”

But in 2008, SCEMS itself was almost on life support — still in service but with about 12 members barely able to cover the 24-hour, seven-day summons from students in distress.

“It had had to close down for a whole year at one point,” Glickman said. “It was on the brink of collapsing.”

“Immediately we started building the culture,” Green said. “We went from a rag-tag little group to a top-tier, high-standard-of-care operation, because of the people we kept around us.”

“SCEMS exploded at that point,” Glickman recalled. “We were expected to take on all the emergency calls, get the training, and work on getting the agency back to where it should have been.”

By 2012, the emergency rescuers boasted around 100 members.

When the banks of the Susquehanna River flooded Binghamton in late 2011, a rejuvenated SCEMS team answered the call for mutual aid from its Binghamton University counterpart agency, moving stunned college students as well as Triple Cities residents out from harm’s way. Teamed with rescue crews from the American Red Cross, the National Guard and other SUNY institutions, SCEMS looked after more than 2,000 evacuees.

“Nobody had given us that type of responsibility before,” Green said. “For better or worse, and it really landed on better, that is what really kicked off our disaster careers for all of us.”

“SUNY Cortland EMS completely changed my whole outlook on life, it really turned me into the person I am,” Glickman said.

“If not for SCEMS, I would not be where I’m at today,” Jolliff said.