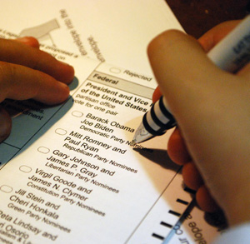 
Robert Spitzer, a professor and chair of political science at SUNY Cortland, will offer his opinion on whether it’s already time to pull the sheets up over the Obama presidency, during a community roundtable on Thursday, Oct. 16, at SUNY Cortland.

Spitzer, promoted by SUNY in 1997 to the rank of Distinguished Service Professor, will give his presentation titled “November 2014 Midterm Elections” from 8 to 9 a.m. in the College’s Park Center Hall of Fame Room.

Sponsored by the President’s Office, the event is free and open to the public. Refreshments will be served at 7:45 a.m. The Park Center is located off Tompkins Street and parking is available in the Park Center and Professional Studies Building lots.

“With the Democrats expected to take a beating in the November 2014 midterm elections, Barack Obama will face the unpleasant prospect of a more aggressive and even more partisan Congress for the final two years of his presidency,” Spitzer said.

“This talk will examine the factors that will shape the outcome of the congressional races, and what this says for national politics in the next two years.”

A nationally recognized authority on political subjects including the U.S. Constitution, the U.S. presidency, and the politics of gun control, Spitzer earned his bachelor’s degree from SUNY Fredonia and his master’s and doctoral degrees from Cornell University.

He is a regular panelist on the weekly public affairs program, “The Ivory Tower Half Hour,” broadcast on WCNY-TV, Syracuse.

Spitzer has appeared on NBC’s “Today Show,” ABC’s “Good Morning America” and “Network Nightly News,” the Public Broadcasting System’s (PBS’s) “News Hour With Jim Lehrer,” MSNBC’s “All In With Chris Hayes,” CNN, CNBC, NHK Television (Japan), the PBS documentary film “Guns and Mothers,” and has been quoted in or by the New York Times, the Washington Post, Time magazine, the Los Angeles Times, USA Today, the Wall Street Journal and the Christian Science Monitor, among others.

His op-ed articles on gun control and other subjects have appeared in many newspapers around the country.

He is also series editor for the book series American Constitutionalism for SUNY Press.

Spitzer has written more than 600 articles and papers that have appeared in many journals and books on a variety of American political subjects.

From 2001 to 2003, Spitzer served as president of the Presidency Research Group of the American Political Science Association. He was a member of the New York State Commission on the Bicentennial of the U.S. Constitution and has testified before Congress on several occasions.

In 2003, Spitzer was honored with the SUNY Chancellor’s Award for Excellence in Scholarship and Creative Activities.