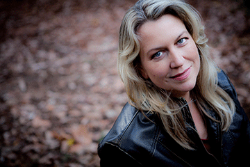 
Cheryl Strayed, whose best-selling memoir of a 1,100-mile hike of recovery and self-discovery became the Reese Witherspoon movie Wild, will give a virtual talk with SUNY Cortland students, faculty and staff about her journey, her life and the art of writing on Tuesday, Nov. 16.

“Distinguished Voices in Literature: Cheryl Strayed” will begin at 5 p.m. via Zoom. The online presentation and conversation is free and open to the public but participants must register in advance.

The discussion will feature an opportunity to engage with an author of three best-selling books and the inspiration behind an Oscar-nominated film.

Originally scheduled as a live lecture for March 12, 2020, as part of Women's History Month, the event was cancelled at the start of the COVID-19 pandemic and returns as part of the English Department's annualDistinguished Voices in Literature series as well as the Cultural and Intellectual Climate Committee's (CICC) 2021-22 series on the theme of "Memory."

Organizers are trying to line up an opportunity for participants to view Wild in advance of Strayed's talk.

“Cheryl Strayed is a powerhouse of a writer,” said organizer Heather Bartlett, a SUNY Cortland English instructor and co-director of its Distinguished Voices in Literature series.

“This is such a special opportunity for our students and community, not just because of Strayed's fame, but because of the strength and compassion she models as a writer and public figure.

“She writes with fierce honesty. She offers up her vulnerabilities without apology. She lifts up other writers, other women. Cheryl Strayed shows us all how to be courageous and gritty without sacrificing who you are. Isn't this just what we hope for our students, for ourselves?”

Strayed’s honest courage is evident in Wild, which recounts how, at the age of 26, childhood abuse, divorce, drugs and the devastating death of her mother had all but destroyed her life. She improbably sought escape from self-loathing and self-destruction by walking the Pacific Crest Trail from California’s Mojave Desert to the Washington/Oregon border.

It was the first time she had ever backpacked.

The adventures she had, the people she met, the ordeals she surmounted and — most importantly — the life-changing realizations she came to during that 1995 odyssey, eventually became the #1 New York Times bestselling memoir Wild. Published in 2012, it was chosen by Oprah Winfrey as her first selection for Oprah’s Book Club 2.0.

Strayed, who also wrote the New York Times bestsellers Tiny Beautiful Things and Brave Enough, and the novel Torch, has seen her books translated into nearly 40 languages around the world.

Tiny Beautiful Things is a collection of essays from the anonymous “Dear Sugar” advice column she wrote for the online literary magazine Rumpus. The book was adapted for the stage by Nia Vardalos, who also starred in the role of Sugar/Cheryl. The play debuted at The Public Theater in New York City in a sold-out run in 2016.

In addition to the English Department and CICC, Strayed’s presentation is supported by the President's Office, President’s Fund, the Writing Center and SUNY Cortland Auxiliary Services.