B.A. and B.F.A. Students to Exhibit at Dowd Gallery 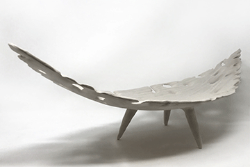 The large-scale installation works by Erin Schiano reflect her wish to address “an urgent environmental conversation of the 21st century between humans and the world they inhabit,” suggesting that one’s surroundings can be treated as conscious beings.

The exhibition aims to fulfill part of the students’ year-long thesis requirement toward graduation with either a Bachelor of Arts (B.A.) or a Bachelor of Fine Arts (B.F.A.) degree. They also must give written and oral presentations to complete the degree program.

An opening reception and artist’s talks will be held from 4:30 to 5:30 p.m. on Thursday, April 11, at the gallery in the Dowd Fine Arts Center, located at the corner of Graham Avenue and Prospect Terrace.

Gallery hours are 10 a.m. to 4 p.m. Monday through Friday and by appointment. The gallery is closed on weekends. Dowd Gallery exhibitions and programs are free and open to the public.

Brown, of Cortland, N.Y., a B.A. candidate in art and art history with a ceramics concentration, has named her collection “Disquiet.”

The simplicity of form and texture combined with linear surface treatment on her pieces is working with the tension between sensory experience and memory, she said.

“The practice of yoga has been eye-opening,” Brown said. “It led me to experience momentary discomfort, which was emotionally revealing, purging and sometimes scary. The practice showed me a way to communicate unity that has evolved slowly and gradually as my body moved through various poses, creating a form of release.”

Brown will be graduating in May after a 10-year journey through higher education. Over the years, she has attended Buffalo State College, SUNY Geneseo, Onondaga Community College and SUNY Cortland. Being readmitted to SUNY Cortland has given her connections that have opened up opportunities like attending the National Council on Education for Ceramic Arts in 2018. For her art, Brown also has traveled abroad to Belize and Cuba in 2019 and attended a workshop at Pocosin Arts School of Fine Craft in Columbia, N.C.

Brown earned third place in the Student Select in 2018 for two series of porcelain drinking vessels. She earned a place on the President's list and Dean's list.

McEvoy, a B.F.A. candidate from Nyack, N.Y., has majored in studio art with a specialization in ceramics.

“I was influenced by natural forces and environmental transformations which occur over time, including textures and surfaces of plant-based materials,” McEvoy said of her display, titled “Echoes of Nature.”

These visual observations informed her approach toward surface manipulation.

“Clay is an ideal medium to explore the natural world because the physical process in clay mimics changes and progressions in nature,” McEvoy said.

The “Echoes of Nature” series reflects natural occurrences such as decay, erosion and growth without necessarily replicating them.

“I enjoy maintaining a sense of ambiguity behind my work and its meaning because it allows the viewer to interpret the work on their own and engage in a personal narrative,” McEvoy said.

Her works were exhibited in the Best of SUNY Student Art Exhibition 2018 in Albany, N.Y., and in SUNY Cortland’s Student Select Exhibition in 2017 and 2018. McEvoy received the College’s Jo Schaffer Award in Art History and its Gerald N. DiGiusto Award in Studio Art. She created the painting of the campus’ Old Main building for the 2017 SUNY Cortland Holiday Message.

B.F.A. candidate Schiano, from Swain, N.Y., will showcase “Documents of Interest,” an installation comprised of a series of sculptural forms accompanied by a collection of black and white photographs set in the center gallery. She conceived the piece using materials associated with the agricultural forestry industry and an industrial foundry.

Manipulation and enhancement of natural environments have been regarded as a requirement of human survival since the very beginning of human civilization, Schiano asserts.

“With the consistent development of new technologies, the path of positive production is becoming one of destruction,” she said. “Pressing issues such as global climate change, overpopulation and world hunger require a shift in the conversation to include how scientific developments can be used to better living conditions for the masses.”

“The stirpiculture experiments of the Oneida Community resulted in the planned conception and raising of 58 children bred from members of the community selected for religious and intellectual superiority,” Schiano said.

Schiano has participated in several art exhibitions, including “Liquid Earth,” a group show of international artists at the University of Scranton in conjunction with the 2018 International Conference on Contemporary Cast Iron Art. She was chosen as Best of Student Select at SUNY Cortland’s Dowd Gallery in 2017 and received Gallerists Choice in the 2018 Student Select exhibition. Schiano was chosen as a finalist at the 2018 SUNY Best of Student Art exhibition in Albany, N.Y.

Selected as an Undergraduate Summer Research Fellow in 2017, she traveled to Jingdezhen, China to research cottage industry iron casting technologies. The research conducted was presented at the 2018 Transformations Conference of Student Research. Schiano will present a defense of her thesis, “Documents of Interest,” at the 2019 Transformations Conference on April 12.

For more information about the gallery, visit cortland.edu/dowd-gallery. Group tours are available and can be arranged by contacting Jaroslava Prihodova, interim gallery director, at 607-753-4216.