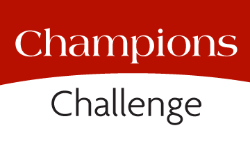 
Nov. 12 was a terrific day to be a Red Dragon for the 687 SUNY Cortland alumni, students, parents, faculty, staff and friends who wore red and raised more than $100,000 to support the College.

Over the course of 24 hours, the Champions Challenge saw donors give a collective $114,226 after two different challenges were laid out. Gifts came from all different groups from all across the world. Together, their generosity will benefit causes that touch every corner of campus: student scholarships, undergraduate research, arts and cultural programming and athletics to name just a few.

“Today was a wonderful celebration of everything Cortland,” said Jennifer Janes, the director of The Cortland Fund. “Through financial gifts to the College, alumni, parents, friends, students, faculty and staff demonstrated their appreciation and pride for SUNY Cortland.”

The College had set an initial goal to convince 273 people to give gifts of any amount to any cause at SUNY Cortland. In return, Gerald “Jerry” Theisen ’53, M.S.Ed. ’58 and Monica Bedford Voldstad ’72, M.S.Ed. ’77 would generously pledge a collective $11,000 to SUNY Cortland.

On the big day, students worked the telephones throughout the day and staff and volunteers entreated campus support from tables in building lobbies as well as on social media to raise excitement among their classmates, family and friends. Numerous donations were linked to the Class of 2016 Senior Class Gift and Alumni Reunion 2016. Around 10 p.m., more than double the original goal was achieved.

Early that morning, SUNY Cortland President Erik J. Bitterbaum arrived at The Cortland Fund office in Brockway Hall to formally kick off the blowout fundraiser by pledging a special gift to a College cause near and dear to his heart: the Dowd Fine Arts Center Theatre’s Take-a-Seat Campaign.

“We asked our Cortland family to show their support for the College and they really stepped up,” said Bitterbaum, who that evening joined Dragon Dialers in the Call Center at the telephones asking for gifts.

“I’m just thrilled,” said Bitterbaum, who personally raised $150 as well as school spirit among the alumni he reached. “This proves that SUNY Cortland people are champions, most of all when it comes to demonstrating their pride, loyalty and generosity.”

Gifts were submitted online, called in over the phone and delivered in person from alumni, students, employees and friends of the College. They ranged from very modest contributions from students acknowledging the campaign’s purpose to one $5,000 dollar check.

With more than 273 gifts submitted by 2 p.m., two very generous Cortland College Foundation Board members, Fritz Favorule ’76 and George Weissman, Esq. ’76 came forward to offer a new collective challenge gift of another $10,500 if College supporters would double their participation with 546 donors before midnight.

“It’s going to take a collective effort to prepare the next generation of Cortland graduates, one that’s ready to accomplish great things,” Favorule noted. “All gifts, regardless of size, add up.”

“Gifts are meant not only to help current Cortland students, but those of future generations,” Weissman said. “Success can only be measured by the collective effort of alumni and future graduates to support Cortland’s mission of bringing forth the best in those passing through its halls tomorrow.”

People who made gifts to the College had the opportunity to designate their funds for a certain area of campus, as they do every day, Janes said. The challenge incentive simply gave a push to a collective, single-day effort.

The Champions Challenge was the College’s second 24-hour fundraising effort. The first was the 2/27 Challenge in February 2014. This year’s total topped the College’s remarkable 2014 campaign results by $11,369.

“There was a lot of excitement the last time we did this, both on campus and among alumni living across the world,” Janes said. “This year, we upped our initial goal and changed the date to build on the excitement of Cortaca.

“But the parameters remained the same: any gift of any amount from any supporter moved us one step closer to our goal of 273, which was chosen to represent the 73,000 alumni that SUNY Cortland is proud to claim as its own.”

The alumni who offered the original gift match described their ties to their alma mater:

“We were teachers for all of our working lives, and we shared a lot of memories together because of Cortland,” said Theisen, a retired high school science teacher and lifelong supporter of education, referring to his marriage with his late wife Ethel ’55. “Those are the places that matter, and that’s Cortland for us.”

Similarly, Voldstad, a tireless volunteer for many important causes and a member of the Cortland College Foundation Board of Directors, remains connected to the College because of lifelong friends she made as a member of the Alpha Sigma sorority.

“My friends keep me interested, and so does the overall progress of the College,” the former childhood education major said. “You can’t beat an affordable education that offers a wide variety of majors … majors that can take students on to do some amazing things.”

Supporters are encouraged to sample the excitement that the challenge generated that day by visiting the Champions Challenge webpage or using #CortlandChallenge on social media.

“Many thanks to all those that stepped out to help us conquer the challenge and show our support for Cortland students,” Janes said. “Every gift matters and shows the world that we are all champions.”