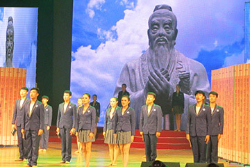 
If charting a successful course through college and life requires the wisdom of Confucius, SUNY Cortland can help.

Starting in Fall 2016, the College’s students may pursue a wide variety of academic disciplines in the birthplace of the great Chinese philosopher and educator whose teachings formed the basis of the moral, social and political system known as Confucianism.

And SUNY Cortland students can take advantage of the new international program for less than the cost of a semester in Cortland.

That’s one result of a new partnership between the College and Qufu Normal University, a large, multidisciplinary doctoral level institution located in Qufu, an historic city in Shandong Province near China’s eastern coast. The agreement creates a two-way street for each institution’s students and faculty to visit, collaborate and learn more about one another’s countries.

“The College has had a very similar exchange program with Capital Normal University since 1981, and this also will be an ideal arrangement in terms of affordability,” said Mary Schlarb, who directs the College’s International Programs.

The two institutions, Qufu and Cortland, agree to waive tuition for several visiting students each year and to give the students full access to each other’s academic programs and services, she explained. That means a SUNY Cortland student would pay SUNY tuition and only pay Qufu Normal for room, board and related costs.

“Because of the lower living expenses in China and our scholarships, it costs our students in the Capital Normal University program less to go there, including airfare, than to be living on the Cortland campus,” Schlarb said.

The agreement with Qufu Normal University was formalized by a visiting delegation from SUNY Cortland from Oct. 9 to 18. In addition to Schlarb and President Bitterbaum, the delegation included Shufang Shi Strause, associate professor of childhood/early childhood education; and Luo Xu, professor of history.

During the trip, Bitterbaum gave a lecture on the American higher education system. The group met with faculty and administrators involved in the new collaboration at Qufu Normal University as well as those at Capital Normal University, strengthening the College’s almost 35-year-old exchange program in the Chinese capital.

While in Beijing, the delegation visited cultural landmarks and reunited with about eight Capital Normal University alumni who once studied at SUNY Cortland and about six university faculty who have worked closely with the College over the years. Since the Capital Normal University program was established, a total of 65 Chinese students have studied at SUNY Cortland. The College, in return, has sent 85 Cortland students to CNU.

SUNY Cortland faculty and staff used part of their trip to explore ways to increase Cortland participation in study abroad opportunities in Asian countries, Schlarb noted. The possible approaches include:

“It’s important for us to look everywhere abroad, but this is one direction I would like to see us taking, in terms of recruiting Chinese students here as well as sending our students there,” said Schlarb, who for a time lived in Indonesia.

“China and the region will have an increasingly significant role in the world economy, and our students can benefit greatly, personally and professionally, from gaining experience and familiarity with Asian cultures.”

Shi Strause and other interested College faculty members in a broad range of disciplines began discussing a possible partnership four or five years ago. They formed an advisory council to work closely with International Programs on the initiative.

Qufu Normal’s location is rural compared to Capital Normal in Beijing. Embedded in a cosmopolitan city approximately the size of Buffalo, N.Y., Qufu’s main attraction appears to be that its beautiful landscape is dotted with UNESCO World Heritage sites honoring Confucius, nicknamed by the Chinese as the “first teacher.” The Temple of Confucius, one of the heritage sites, was established in 478 B.C., with the current sprawling complex mostly dating from the Ming and Qing dynasties.

The 60-year-old university started out as a teacher’s college, something it has in common with SUNY Cortland. The university now encompasses 84 undergraduate programs, 115 master’s degree programs and 31 doctoral programs. With almost 33,000 undergraduate students and more than 3,400 graduate students, the university’s mission is to provide a world-class education for its students who come from a largely non-urban population.

“It’s a beautiful, well-equipped campus,” Schlarb said. “Areas of curricular overlap include education, sports science, teaching English as a second language and other disciplines in the sciences, social sciences and humanities. We discussed with our new QNU partners several concrete opportunities for graduate and undergraduate programs and student and faculty exchange in these areas.”

Qufu Normal is well-prepared to help students learn the history, culture and ethos of China in credit or non-credit bearing courses. The university encourages international faculty on sabbatical to teach semester long or short-term courses in English on variety of subjects.

“I was the first girl in my village or county that went to college,” said Shi Strause, a self-described “country bumpkin” who as a child studied by lamplight because her village in Shandong Province had no electricity. She became the first child in her extended family to pursue a college education, and earn a life-transforming degree, before going further still, to pursue additional studies and a career in America.

“Many kids in Shandong Province are from a working class family and going to college is such a precious opportunity for the family, for their young people,” Shi Strause said. “The residents are well-known for working very hard at college, spending lots of time in the library.”

It was Shi Strause who dreamed that SUNY Cortland could expand its China study abroad opportunities with the same university that transformed her from a country schoolgirl to an inquiring academic.