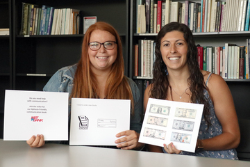 
Graduate students in SUNY Cortland’s communication sciences and disorders program spent part of this summer designing a “menu” of financial transactions that people with aphasia could use as a visual aid when communicating in public settings like banks.

Their efforts are making an impact in the local community, as tellers at NBT Bank on Main Street in Cortland have begun using the menu for customers with aphasia who may have difficulty saying or pronouncing words or following conversations and written instructions.

Aphasia, a condition that impairs the ability to process language, can be caused by head trauma, stroke and dementia or a number of other medical issues. It affects more than 2 million Americans, yet approximately 80% of Americans are unaware of the condition.

Hilary Dwyer ’17 of Cortland, N.Y., and Beth Coppolecchia of Somers, N.Y., decided to build on the work of previous students in the communication sciences and disorders program. During the summer of 2018, SUNY Cortland students created a menu for patients at Guthrie Cortland Medical Center, then known as Cortland Regional Medical Center, that allowed them to point to pictures of the food they wanted to eat.

Dwyer had previously worked at the NBT Bank branch on Main Street and had interacted with customers who showed an aphasia I.D. card, which indicates that they had challenges in communicating verbally. Together, she and Coppolecchia created a book that allows those with aphasia to have greater independence in conducting basic bank transactions such as making deposits, opening an account and more.

There is also a separate card with large, color photos of the different denominations of bills that will allow customers to point to the exact change they would like to receive.

“Individuals with aphasia don’t always do well with a lot of overwhelming stimuli, especially where it’s noisy and people are waiting on line,” Dwyer said. “Something like this, when they can be familiar with it and flip to a certain page and know the teller is familiar in communicating with them just makes things easier for them. It’s a calmer atmosphere and relieves some of that anxiety.”

The students dropped off the materials to NBT Bank in late July. Staff have been trained in how to assist those with aphasia. If the trial goes well, NBT Bank may look to expand the program to its Groton Avenue branch as well.

Dwyer and Coppolecchia will start medical externships in the fall that they hope will help give them more experience and potentially influence their career choices. Both were grateful for the opportunity to engage with a partner in the local community this summer.

“You’re taught all of these things in the classroom and you want to go out and make it functional for the people who are going to be working with it,” Coppolecchia said. “It’s something we could be doing once we get our work certification and we’re practicing after we graduate. It’s nice to be able to apply what we’re learning and help in the community while raising awareness about it.”

“You can talk about things all you want, but until you’re actually practicing them in action, it doesn’t solidify for you,” Dwyer said. “Being able to do this, we were able to learn more individual things and I think either of us would be comfortable creating any type of communication book like this, which is a great skill to have.”

SUNY Cortland students have met with local people in the Friends of Aphasia Support Group since it was created in January 2019. In fact, those monthly meetings have helped lecturer Eileen Gilroy better tailor her classes as she and her students learn about the real issues affecting the lives of those with aphasia.

In fact, Liberty Resources Center for Brain Injury and Rehabilitation, located on Main Street in Cortland, heard about the menu created by students last summer and requested a copy. Although it was created for hospital patients, the menu is now also used when Liberty Resources' patients eat at local diners and restaurants.

For Gilroy, these projects have been a win-win. Her students get hands-on experience and meet professionals in the field. The aphasia community in Cortland has also benefited greatly from their efforts.

“They’ve also been involved in community awareness projects and with other speech language pathologists in the community,” she said. “It’s not only getting them out and advocating for individuals in the community, it’s also about doing it in our professional organizations locally.”