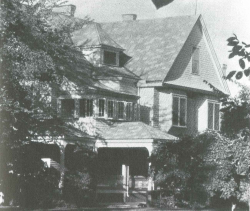 
Sixty-five years after it happened, Merilyn “Lynn” Hiller ’49 still remembers the confused shouts and frightened cries that woke her up in the three-story house she shared with her Arethusa Sorority sisters.

Smoke and darkness filled the second-floor hallway outside her door as the 27 women sleeping in the wooden building near the intersection of Church and Port Watson streets struggled to find their way outside.

“I made my way out into the hall and I could hear the women coming down from the third floor, crying and calling out,” said Hiller, now 86, recalling the deadly, Nov. 21, 1948 kitchen fire that swept through the Arethusa house. “So I tried to call back to them.”

Many sisters followed Hiller’s voice to safety before the flames blocked Hiller’s exit and she was forced to escape through a second-story window.

Three young women, all seniors prepared to graduate with the Class of ’49, ultimately perished in the blaze and Hiller suffered life-threatening burns and injuries.

It was the most devastating event in the history of the College.

The American flag outside Old Main hung at half-mast for six months. The State University of New York system, horrified by the incident, focused on fireproofing student residence halls. And the 1949 Didascaleion offered a yearbook dedication to Barbara Kelsey, Marie Meyer and Lillian Rudnetsky, the seniors who died in the blaze.

Those names, and the tragically shortened young lives they represent, will once again be on the minds of the Class of 1949 this July, when a plaque marking a permanent campus remembrance is dedicated during Alumni Reunion 2014.

Up to 40 classmates of the victims — representing roughly a third of the Class of 1949 — are expected in Cortland that weekend for their 65th reunion. It’s unprecedented attendance for a group that includes many World War II veterans, a class that graduated when Harry Truman was president and baseball’s Dodgers still resided in Brooklyn.

“This is a special group,” said Erin Boylan, the College’s associate director for alumni engagement, of the Class of ’49. “They care so much about Cortland, and they’re incredibly loyal to each other.”

The inclusion of a memorial ceremony for the three classmates lost in the fire came about after the relatives of Lillian Rudnetsky contacted the College.

Helene Rudnetsky James ’56 was 13 when her sister died from smoke inhalation and burns suffered in the fire.

“She was the only close person I ever had. I loved her a lot," said James, who attended Cortland partly as a tribute to her sibling. “I wanted to do what my sister had not finished … I felt that if I went to Cortland and became a teacher, it would make my parents proud.”

James, originally from Center Moriches, N.Y., spent the majority of her career teaching in California. She’s retired now and resides in Cypress, Calif.

She remembers that during her time on Cortland’s campus, nobody ever talked about her sister or the fire. So it was a bit of a surprise when a stranger contacted her last summer to talk about her sister. She turned out to be a long-lost relative.

Carol Seiken of Wyncote, Pa., reached out to James as part of tracing her family’s genealogy.

“All I knew was we had a relative who died at Cortland before I was born,” Seiken said. “It had been a vague story in our family.”

It took roughly six hours of research before she was on the phone with James. They soon determined their grandparents were siblings. They also agreed that there should be some sort of memorial to the tragedy on the SUNY Cortland campus.

Seiken wrote to SUNY Cortland President Erik J. Bitterbaum in October and plans developed to place a plaque near the “moving up” rock behind Old Main, the spot where Cortland students gathered each spring from 1927 to 1970 for a Moving Up Day ceremony.

It’s a fitting location, given the dedication that was published in the 1949 Didascaleion.

“To … a memory of three seniors who were ready to take their places in a world where they were needed, but who have left us for a larger life,” the yearbook read. “To a future fuller and more significant for us because it was unfulfilled for them.”

Soon, many remaining members of the Class of 1949 again will remember their classmates when the permanent tribute is unveiled at Reunion. Unfortunately, Hiller, who is no longer able to travel long distances, will not be among them.

Her actions during that 1:30 a.m. fire were credited with saving lives. By choosing not to immediately escape herself but to position herself by the steps that led to the first floor and guide her housemates down, she put her own life in danger.

“I stayed right there,” she said. “It was all instinctive.”

The fire eventually blocked Hiller’s escape, forcing her to break her bedroom window with her bare hands. She was carried out of the second-floor window by a firefighter.

The day after the fire Kelsey was dead and Hiller was listed in critical condition with Meyer and Rudnetsky, according to the Cortland Standard.

The road to recovery from her cuts and burns was painful, but Hiller managed to graduate on time with a degree in physical education. She taught for four years in the Newfane (N.Y.) Central School District before earning a master’s degree from Cornell University and spending the majority of her career as a researcher at the National Institutes of Health in Bethesda, Md.

Both the local American Legion and the Carnegie Hero Fund Commission recognized Hiller for heroism. Although Arethusa disbanded at SUNY Cortland in 1988, the sorority’s motto offers an accurate description of Heller’s actions: “Loyal sisters all.”

“We were all very close,” Hiller explained. “We saw each other every day. We ate together. We had meetings together. We played together.