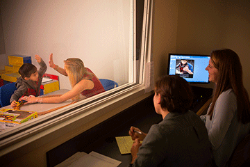 
SUNY Cortland’s five-year-old master’s program in speech-language pathology has been re-accredited, ensuring both students and potential employers that the program meets the highest national standards of professional excellence in this high-demand field.

The Council on Academic Accreditation in Audiology and Speech-Language Pathology (CAA) voted in April to award SUNY Cortland full accreditation for its residential graduate program through Jan. 31, 2023. Today, the program is nearly at full enrollment with 29 future communication disorders professionals preparing for careers at schools and medical clinics.

“The master’s degree has become the entry level for the profession,” said Ann Blanton, associate professor and the current department chair, underscoring the importance of the program and the national distinction that comes with accreditation. “So it was very timely that this department developed a master’s degree.”

Traditionally, graduates in the field who had bachelor’s degrees could always work in elementary, middle and high schools without a master’s degree, she said.

But that window is closing fast. New York is among many states that are phasing out school clinical practice by college graduates who have only an undergraduate degree in the discipline. Hospitals and medical centers stopped employing clinicians who lack master’s degrees in certified programs some years ago.

Seeing this change coming, faculty in SUNY Cortland’s Communication Disorders and Sciences Department more than a decade ago began working on creating a graduate program and making sure it met the strict professional standards that come with accreditation. They also shifted the teaching emphasis of the speech and hearing clinic the department runs for community members on campus.

“For years the Center for Speech, Language and Hearing Disorders was run for undergraduate students, who upon graduation were eligible to work in the public school system,” Blanton said. “But the department, as long as 15 years ago, worked on getting a graduate program.”

The graduate students now help deliver the majority of free public services offered to clients of all ages at the Center for Speech, Language and Hearing Disorders. During their two years at SUN Cortland, that gives them the extra hands-on experience expected from an accredited graduate program.

It’s a change administrators had hoped to make years ago, noted the former chair, Associate Professor Regina Grantham, who spearheaded the graduate program’s creation. However, the former clinical site in the College’s McDonald Building on Tompkins Street would not support the expansion.

The department added the program only after it had moved into the then-newly renovated Professional Studies Building off Tompkins Street, complete with the state-of-the-art clinic and adjacent classrooms and faculty offices that the department uses today.

The new graduate program is almost at full capacity, as a testament to its success, according to Blanton, who left a similar program at the University of California at Sacramento to take over as chair in 2017.

Creation of the graduate program and this year’s re-accreditation mark critical milestones in the Communication Disorders and Sciences Department’s 50-year history. And the accrediting agency’s stamp of approval is just the most recent accolade earned by the department.

In 2017, Zippia.com, a company created to help young people find good careers, described SUNY Cortland’s communication disorders and sciences program as the No. 2 program of its kind in New York state. Zippia noted that the master’s level graduating classes of 2013-15 and 2014-16 both had 100 percent employment rates and both had 100 percent Praxis speech-language pathology exam pass rates.

“Speech language pathology is a high-demand profession,” Blanton said. “It’s a real benefit to any community, in educational and medical settings. It’s an excellent profession with a real ability to make a difference in the lives of people.”

The CAA is run by the Rockville, Md.-based American Speech-Language Hearing Association (ASHA), which is the national professional, scientific and credentialing association for more than 182,000 members and affiliates who are audiologists; speech-language pathologists; speech, language, and hearing scientists; audiology and speech-language pathology support personnel; and students.