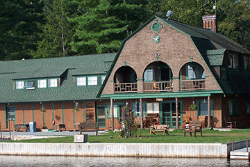 
In 1965, while America focused on U.S. President Lyndon B. Johnson’s “Great Society” address, several NASA space exploration milestones and a rapidly escalating Vietnam War, SUNY Cortland was writing the next chapters of its own history.

Half a century ago, the campus acquired a small resort facility in the Adirondacks and a large tract of rolling woodlands and meadows about seven miles south of the main campus.

The timing was pure coincidence, except that both the Raquette Lake property called Antlers and the Cortland County land known as Hoxie Gorge were well suited for course fieldwork in a variety of disciplines. Moreover, they met SUNY Cortland’s need to expand and enrich academic programs for students enrolled in what was then a rapidly growing college.

Since that landmark year, many generations of students have experienced hands-on learning opportunities at both campuses, which today are an integral part of the William H. Parks Family Center for Environmental and Outdoor Education.

Graduates recall with great fondness their time spent at these outdoor classrooms. For some, it was their first close encounter with wilderness.

SUNY Cortland plans to celebrate 1965 as a special, vintage year in College history. This summer, the College community will invite alumni, faculty, staff and representatives of the SUNY Cortland Auxiliary Services Corporation (ASC) — which facilitated the acquisitions — to celebrate the milestones on Saturday, July 11, at Hoxie Gorge and on Saturday, Aug. 22, at Antlers. Details are still developing, and can be checked at cortland.edu/rl-events as the dates draw closer, but here are the basics:

Several faculty members who worked hard to acquire and develop programming at the properties are still living and are invited to the ceremonies.

The Antlers transaction was negotiated on Jan. 15, 1965, with George Fuge, the late director of environmental and outdoor education at SUNY Cortland. The College already owned the remote Camp Huntington on Long Point but needed a more direct and affordable way to bring students and faculty to and from its dock.

“For years, the way we got people up here was to park at one of the local marinas and pay them a fee to transport people over here to Huntington,” said Robert Rubendall, current director of the W.H. Parks Family Outdoor Center. “And in the winter, we had to cross over on the ice from the south shore of the lake. It was not a very advantageous arrangement at all and very expensive because of the fees we paid to the marina.”

Antlers was originally a strategic purchase to give the College docking privileges, convenient parking and offices, extra storage and classroom space, and a way station for travelers preparing to visit Camp Huntington. Within a few years, it was adapted to host a number of student and alumni programs throughout the summer season.

Although it is not listed with the National Register of Historic Places like Camp Huntington, Antlers came with its own long and colorful story. Built in the late 1880s as a small resort and hotel with small cabins, lean-tos and platform tents in addition to the Antlers Hotel, today’s Antlers retains the name but is comprised of only seven original buildings remaining from a large parcel that was gradually subdivided and sold off to private landowners.

The accessibility of Antlers to roads and civilization from mid-May through mid-October, especially when ice formation and melt on Raquette Lake prevented travel over the lake to Camp Huntington, quickly increased its use for educational programming.

“It became clear, within a year, that we needed much more space to operate summer programs as well, and that’s when we acquired the hotel, the Main Lodge up above,” Rubendall said. “That has roughly 20 beds, and so that doubled the capacity of the facility itself.”

Fifty years later, classes of students annually use the 45-bed Antlers facilities as a base for their experiential learning or as a launching point to visit the College’s nearby, much larger Camp Huntington facilities. In summer, alumni flock to Antlers beside the pristine lake for programs that allow them to recharge their bodies as they renew their friendships with classmates.

“I think the number of alumni that come back year after year to enjoy Antlers with their families speaks to its value,” Rubendall said. “We just built a new amphitheater there last year and we’re in the process of remodeling the kitchen in the Main Lodge. So the College is really putting its resources into making sure that Antlers continues to be a viable and valuable part of the whole outdoor education process here at Raquette Lake.”

Meanwhile, roughly 1,000 students a year visit Hoxie Gorge with its rushing tributary into the Tioughnioga River, its venerable stand of old growth Hemlocks and its interesting mix of flora, fauna and geology.

Hoxie Gorge was purchased because rapid development on the main campus had eaten up all the surrounding woodlands where professors formerly had taken their students for field studies, said Larry Klotz, professor of biological sciences, who has managed the facility for 25 years as chair of the College’s Hoxie Gorge Committee.

“Fifty years ago, a lot of classes had just walked out the back door and behind Old Main through nature on the hill,” Klotz said. “But the expansion removed all the areas we could get to through the main campus.”

In 1964, four professors formed a committee that spent the late spring of that year surveying, mapping and studying tax records of suitable land in the immediate area around the College campus. These were George L. McDermott, distinguished service professor of geography; John A. Gustafson and Eugene Waldbauer, both biological sciences professors; and Harlan “Gold” Metcalf, the late professor of recreation and leisure studies.

“The purpose was to create an outdoor area for interdisciplinary use by many departments,” Rubendall said.

The committee identified an ideal 169 acres and convinced three separate landowners to sell their adjacent former farmlands to the Student Faculty Association in the early fall. McDermott managed the property for the first 25 years.

“It’s easy to get to, you can go out for a couple of hours,” Rubendall said.

The site has only an outhouse and a lean-to, but it sees heavy yearly classroom traffic. In addition, faculty members and students use it frequently for research purposes, Klotz said.

“There have been about 41 academic journal publications, books or master’s theses done from studies there and $1.16 million in research has been conducted in whole or part at Hoxie Gorge,” he said.

Klotz, who this year turns over chairmanship of the committee to Steven Broyles, biological sciences, and David Barclay, geology, will help organize the anniversary festivities.