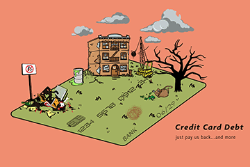 Her talk, on how the changes to the federal Supplemental Nutrition Assistance Program illustrate a growing national food crisis and the abandonment of America’s food safety net, will run from 5 to 6:30 p.m. in in Brockway Hall Jacobus Lounge.

The series of events are free and open to the public. To view a list of upcoming topics, visit the CICC’s calendar.

Dickinson’s recent Atlantic article highlights the trend she will discuss at Cortland. In it, she asserts that the coming SNAP cuts will make it harder for states to waive the federal program’s work requirements in areas of high unemployment, and target able-bodied adults without dependents. She said the rule will affect not only the targeted individuals but their families as well.

“The issues I saw in New York will play out nationally under the new cuts, and the Trump administration’s stated rationale — that able-bodied unemployed SNAP recipients should find jobs instead of depending on the government — obscures these consequences,” Dickinson said.

“It gives the impression that the program has to be protected from lazy, unemployed freeloaders while ignoring, say, the people caring for an elderly parent while out of work and the dads who are looking for work but still trying to make sure their kids have something to eat.”

The policy, Dickinson asserts, ignores the variety of “supportive family arrangements that exist across households and generations, particularly in low-income and queer communities. In this case, the result is more hunger and hardship for the members of low-income families who are doing their best to make sure everyone is cared for.”

THURSDAY, FEB. 20. Stephanie Kelton as the keynote speaker also is a Founding Fellow of the Sanders’ Institute and author of a forthcoming book The Deficit Myth: Modern Monetary Theory and the Birth of a New Economy, which will be published by Public Affairs in 2020. Her research expertise is in Federal Reserve operations, fiscal policy, social security, international finance and employment policy. Kelton’s scholarship has been widely published in a range of academic and popular forums. She received her Ph.D. from the New School for Social Research and holds an M.Phil. in economics from Cambridge University. The talk on modern monetary theory and the policy proposals, including the Green New Deal, which this economic framework makes possible, runs from 5 to 6:30 p.m. in Sperry Center, Room 105.

TUESDAY, MARCH 10. David Fruend will lecture on the history of discriminatory lending practices in the U.S. and its role in perpetuating intergenerational inequality. Fruend, an associate professor of history at University of Maryland, will present from 5 to 6:30 p.m. in Brockway Hall Jacobus Lounge. A specialist in the history of the modern United States, Fruend is the author of the 2008 book, Colored Property: State Policy and White Racial Politics in Suburban America. The text was awarded the 2008 Ellis W. Hawley Prize from the Organization of American Historians, the 2007 Kenneth Jackson Book Award from the Urban History Association and the 2009 Urban Affairs Association Best Book Award. Freund also has contributed to a number of public history, policy and documentary projects as well as receive grants and fellowships from organizations including the Woodrow Wilson International Center for Scholars and the Graham Foundation for the Arts.

THURSDAY, MARCH 12. Scott Ferguson will focus on the politics of care and the aesthetics of money when he returns to visit the campus again from University of South Florida. He will speak from 5 to 6:30 p.m. in Brockway Hall Jacobus Lounge. Ferguson’s research and pedagogy explore relations between political economy and aesthetics from a neochartalist perspective, specializing in the history of Western visual culture from Renaissance painting to the Hollywood blockbuster. His book Declarations of Dependence: Money, Aesthetics and the Politics of Care was published by University of Nebraska Press in 2018. He serves as a research scholar for the Global Institute for Sustainable Prosperity, co-director of the Modern Money Network Humanities Division and co-host of the Money on the Left podcast.