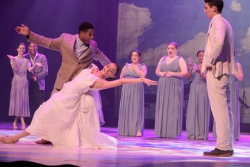 
The musical “Big Fish,” which opens in the Dowd Fine Arts Center Theatre on Friday, Nov. 12, packs many themes into its songs and characters.

It tackles mortality, fatherhood, family dynamics, the passage of time and the meaning of truth, to name a few.

That’s exciting for SUNY Cortland’s musical theatre major student actors, who are feeling energized by the challenge of performing in such a wide-ranging production.

“I really think this show has everything,” said sophomore Aria Odendaal of Tewksbury, N.J., who plays the family matriarch, Sandra. “There are fantastical elements. It’s wacky. It’s fun. But it’s also a beautiful, heartfelt story. Tears will be shed for sure if you’re ready to cry. Or if you’re not, you can laugh.”

“Big Fish,” based on the novel by Daniel Wallace and the 2003 film of the same name, debuted as a Broadway musical in 2013. It is a story focused on the relationship between an aging father, Edward, his son, Will, who is about to become a father himself, and a series of seemingly tall tales that allegorically explain the highs and lows of their lives.

“It’s about living life to the fullest and not holding back,” said junior Kyle Rivera of Freeport, N.Y., who plays Will. “A lot of characters are holding something back. Edward is the one who shows everyone that life isn’t just surface level. You have to go deeper to find the true joys in everything. It’s about those bonds, relationships, family, friends and imagination.”

This production is directed and choreographed by Jeff Whiting, with music direction by Visiting Assistant Professor Jacob Carll.

Whiting has worked on Broadway, television and concerts around the world, including serving as associate director and assistant choreographer for “Big Fish” on Broadway in 2013. He is owner and artistic director of the Open Jar Institute, a musical theatre training program for the development of artists of all ages, and the founder of the Broadway Relief Project, which employed 400 Broadway costume makers to produce personal protective equipment for public hospitals in New York City during the COVID-19 pandemic. The designer and developer of Stage Write Software, a digital method of documenting staging and choreography, Whiting has seen it used on more than 40 Broadway shows and tours.

“It’s been wonderful to connect with these students on the show,” Whiting said. “The world has changed since the show was created, so their perspective on a family divided, which is the core of the story, has been really exciting to see and explore.”

Working with Whiting has been eye-opening for SUNY Cortland’s actors, as his experience with this musical and its characters, as well as his desire for students to experiment with their parts, has made the rehearsal process refreshing.

“Everything we’ve learned in acting class, this is time to use it,” said Tatiana Padro, a junior from Bay Shore, N.Y., who plays Josephine. “It’s great because when you go into rehearsal, Jeffery is so easygoing and great to work with. There’s no stress on the table when you get to rehearsal. He tells us we’re going to try new things today, gives me notes on what I need to try and it’s ‘go time.’”

“To have someone who’s worked with actors who portrayed the characters on Broadway and had real life experience with them, it’s cool because he brings in stories and all this information that helps us find our characters and find the musical,” Rivera said.

“The cast has done an excellent job at making bold choices and have found a way to bring the show to life in a brand-new way,” Whiting said. “It’s truly inspiring.”

Those familiar with the 2003 film will find similarities in the musical adaptation and may also enjoy the differences in the way this story is presented on stage.

“I think it’s about family, friends and the essence of time,” said Dominic Green, a junior from Queens, N.Y. who plays Edward. “We think life is long but it’s so small and it goes by so quick and things can change in an instant. It also teaches us that since life is so short, it’s important to have family and friends and to keep people you love close and not to be afraid to make friends and go on adventures.”

Audience members must wear a face covering at all times when inside Dowd Fine Arts Center. Proof of COVID-19 vaccination with a current student ID or valid driver’s license or proof of a recent negative PCR test will be required for entry.

Learn more about other upcoming events by visiting the Performing Arts Department’s website.