Musical ‘Crazy For You’ Opens Feb. 17 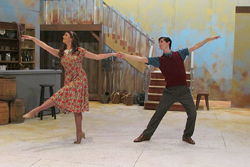 
“Crazy For You,” the Tony Award winning musical comedy inspired by George Gershwin’s 1930 musical “Girl Crazy,” has something to say to today’s young people.

“This show is incredible because it invites us, night after night, to have a good time,” said SUNY Cortland senior Sean Noonan, who plays a lead role in the Performing Arts Department’s upcoming production in the Dowd Fine Arts Center Theatre.

“When I go to rehearsal, I get to live in this wacky world with these wacky characters,” Noonan said of the production — which has memorable music, hilarious characters and non-stop dancing. “It’s refreshing to know that music and writing are still able to inspire us and transport us away from day to day worries for a couple hours each night.”

Admission is $9 for students; $16 for faculty, staff and senior citizens; and $19 for the general public. For the best selection of seats, tickets may be purchased online at cortland.edu/boxoffice. Tickets also may be purchased in person in the Dowd Fine Arts Center lobby one hour before the curtain. For more information on ticket sales, call 607-753-2831.

Directed and choreographed by Kevin Halpin, associate professor of performing arts, “Crazy For You” tells the story of New York banker Bobby Child traveling to a small mining town in Nevada to foreclose on a property. When Bobby discovers that the property is actually an old theater, he has another idea. Bobby recruits the whole town as well as some Broadway talent to put on a show, save the theater and win the heart of the sweetest girl in town.

With fast-paced antics, plot twists and mistaken identities, “Crazy For You” is a comedic delight, according to Jeffrey Whetstone, the department’s production manager and publicity coordinator.

The script, by award-winning Broadway playwright Ken Ludwig, seamlessly weaves together an iconic score by George and Ira Gershwin featuring some of the most well-known standards of the golden age of musical theater. Music director Fred Willard leads the cast in a lineup of classics including “Embraceable You,” “They Can’t Take That Away From Me,” “Someone to Watch Over Me” and a tap dancing extravaganza: “I Got Rhythm!"