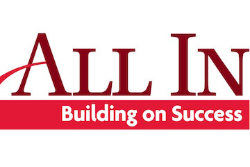 Turybury made that admission in front of 200 fellow Red Dragons on the evening before SUNY Cortland was scheduled to play Ithaca in the best- attended Division III football game of all time. He did it to make a point about the importance of going “all in” to support the Cortland College Foundation, SUNY Cortland’s fundraising organization.

“It came down to $1,000. That was the difference in cost that made me choose Cortland,” he said. “And Cortland has been this wonderful coming together of things in my life. So even a little bit can make a big difference.”

Scholarships aimed at making sure all qualified students can afford a SUNY Cortland education is one of five areas of focus for All In: Building on Success, the campaign for Cortland. The public phase of the five-year effort was launched with the announcement that $17.3 million had already been raised toward the $25 million goal.

“This comprehensive campaign is all about one important group of people — our students,” President Erik J. Bitterbaum said. “We want to continue offering our undergraduate and graduate students the type of outstanding faculty, staff, facilities, equipment, laboratories and auxiliary functions one would expect to find at a world class educational institution.”

In addition to student access, the other four priorities of the campaign are supporting: academic programs and faculty; unique educational experiences; our role as one of the nation’s healthiest and most active campuses; building a lifetime network of support.

“I almost didn’t go to college,” said Chester Bennett, president of SUNY Cortland’s Student Government Association and recipient of several college scholarships. “But this is absolutely the best college I could have gone to. (Donor gifts) have made a difference in the lives of literally thousands of students.”

The kickoff event was held in the Toyota Room at MetLife Stadium, overlooking the field that hosted Cortaca Jug 2019. Each of the dozens of screens that normally run live NFL game coverage of the Giants and the Jets, glowed red and white with the SUNY Cortland logo and the campaign’s “All In” wordmark.

To learn more or to make a donation to the campaign effort call 607-753-5744 or visit Cortland.edu/campaign.