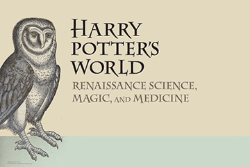 
General falconer Mary Cope will discuss the sport as she shows off her red-tailed hawks, kestrels and owls on Wednesday, Oct 7, on the Memorial Library second floor.

Coincidentally, most of Cope's owls are named after Harry Potter characters.

Until Saturday, Oct. 10, SUNY Cortland’s Memorial Library will continue to turn into Platform Nine and Three-Quarters for all visitors. The destination won’t be the Hogwarts School of Witchcraft and Wizardry, but instead an exhibit where visitors can learn all about potions, monsters, herbology, magical creatures, fantastic beasts, midwifery and immortality.

This traveling exhibition, featuring materials developed and produced by the National Library of Medicine, National Institutes of Health, explores Harry Potter’s world and its roots in Renaissance magic, science and medicine.

Also during the opening reception, student science clubs and the College’s Quidditch Team shared interesting information about things like the science of invisibility, alchemy and the intricacies of their intramural pastime.

Millions of young readers have followed Harry to the Hogwarts School of Witchcraft and Wizardry where he discovers his heritage, encounters new plants and animals and perfects his magical abilities.

“Everyone knows the Harry Potter series either through books or movies,” said organizer Anita Kuiken, instructional services librarian. “People are naturally drawn to his world — a world of fantasy and possibilities beyond the everyday.

“More importantly, it’s a good fit for our campus, because it demonstrates how creativity, passion and thought fuel developments in the sciences, literature and culture.”

Although a fantasy story, the magic in the Harry Potter books is partially based on Renaissance traditions that played an important role in the development of Western science, including alchemy, astrology and natural philosophy.

During the exhibition, six free-standing panels on loan from the National Library of Medicine will be displayed on the second floor of the library. Incorporating the work of several 15th- and 16th-century thinkers, each screen examines important ethical topics such as the desire for knowledge, the effects of prejudice and the responsibility that comes with power.

Meanwhile, the College’s resources in alchemy, birds of prey, Renaissance art and culture and the Harry Potter series itself will be displayed throughout the first floor.

“We encourage those in attendance of the events to join in the spirit of the gathering, so cloaks, wizard hats and wands are welcome though you’ll have to park your brooms outside,” observed Brian Story, instructional services librarian, who also organized the exhibition.