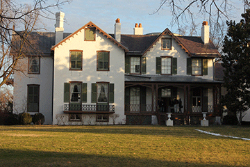 
Some might refer to Scott Stull’s recent anthropology work as a cottage industry.

A presidential cottage industry, to be more precise.

Stull, an archeologist and anthropologist who teaches at SUNY Cortland, is part of a team that’s spent the last two summers firing thousands of laser beams inside President Lincoln’s Cottage. The goal of the scientific light show was to create an exact, incredibly detailed, 3-D computer model of the historic building.

This Lincoln cottage is not the small Kentucky log cabin woven into the folklore of the 16th U.S. president’s childhood. It is the landmark structure used by Abraham Lincoln during his presidency from 1861 until his assassination in 1865, located on the grounds of the Armed Forces Retirement Home in Washington, D.C.

And this Cottage holds more historical significance for many people than the president’s childhood home: It’s where Lincoln finished writing the Emancipation Proclamation.

“This is one of the best-preserved examples of any place from Lincoln’s presidency,” said Stull, a SUNY Cortland adjunct professor who joined the College’s Sociology/Anthropology Department in 2011. “And that was a pivotal moment in American history when he wrote the preliminary draft of the Emancipation Proclamation. It changed the nature of American society.”

Stull is fascinated with the social science of how people from the past worked with tools and occupied space.

“I am interested in status and identity in material culture, the built environment and daily life,” he said.  “I have examined medieval Europe and colonial America in my studies.”

Stull cut his academic teeth on the pre-Revolutionary War-era homesteads of America’s forefathers. “And They Forsooke Stately Buildings: Colonization and the Social Order of New England Houses,” was the title of the doctoral dissertation he wrote for his 2002 degree from Binghamton University.

Stull has a Certificate in Museum Studies from Harvard University. He has studied how people with different social standing were allowed access in and around medieval German castles, and has collaborated with ceramist Jeremiah Donovan, SUNY Cortland professor of art and art history, on reconstructing how early civilizations on different continents created and used pottery.

In keeping with this theme, Stull’s fascination with President Lincoln’s Cottage and other historic buildings centers on “access analysis.”

“There were two main routes, the hall and the parlor,” in the colonial homes of America’s leading citizens, he offered as one illustration. “If you were of low status, you worked in the hall. If you had high status, you got to go in to the parlor.”

The question, he said, is “how do you get into parts of the building and which are more private and less private?”

“Cottage” was the customarily quaint description for bigger dwellings than the name suggests. In this case it refers to the 34-room white Gothic revival mansion where Abraham Lincoln’s family — and U.S. presidents before and after him — spent summers away from the heat and political pressure of the nation’s capital. Back then, it was a very rural retreat.

About 15 years ago, the National Trust for Historic Preservation reclaimed this American treasure, which had been used as a nursing home for retired military personnel for more than a century. The National Trust opened it to public viewing in 2008, but work continues to restore the landmark to what it would have looked like in Lincoln’s time there.

Stull’s team of four is led by Michael “Bodhi” Rogers, an archeogeophysicist and an associate professor in the Department of Physics and Astronomy at Ithaca College. The co-investigators began collaborating about a decade ago when Stull was an anthropologist working for a private company, Hartgen Archeological Associates in Rensselaer, N.Y. Rogers has a doctorate in physics and a master of science in archeology.  Stull brings anthropology and social science to the mix.

“It’s really the overlap of disciplines,” said Stull, who at SUNY Cortland teaches Anthropology of Gender, Introduction to Cultural Anthropology, Medieval Archaeology, Houses of Culture Seminar, the World of Shakespeare and an online Viking Archaeology course.

“This is applied physics: physics applied to archeology, because you need to know the physics of the laser signals that you are getting back,” said Stull, explaining Rogers’ contribution.

The researchers and two Ithaca College student interns spent several weeks at the Cottage last winter using archaeological reconnaissance equipment in the form of a sophisticated digital camera mounted on a wheeled tripod to create a multitude of exact, 3D scanned images of the structure. Supplied by Ithaca College, the equipment captures both the look of the surroundings and their exact location.

“It’s a step up from a panoramic photo, because a panoramic photo has a certain amount of distortion and it’s always from a fixed point,” Stull said. “With a panoramic photo, you can’t say you’ll go to another point and look around. With a 3D image, you can move it around view it from any angle you want, and there’s no distortions. Because all it does is creates this digital visual model of the space.”

Ultimately the goal is to let historians and enthusiasts take an electronic stroll through Lincoln’s Cottage, he said.

“But the original goal and the primary use for this is as a preservation tool,” Stull said. “It’s going to be imported into an architectural drawing program from which you can then select points and link information to it.”

He pointed to a bit of wood frame shown in a project photo.

“Say it’s broken. In 2021, the restoration people will know when this piece was last removed and replaced with a new section, and that this other one is original. Also, they can take this piece from the digital model and send it to a mill, where it can be produced to an exact replica within 5 millimeters.”

Rogers and Stull began planning their project in fall 2014 and the actual digital scanning took place over the course of 11 days in January. This summer, details of the basement and attic were similarly captured.

“Stitching it together and getting a usable product takes a fair amount of time,” Stull said. The majority of site work was wrapped up this summer.

"The reason I think this project is so important is the preservation aspect,” Stull said, mentioning that four different presidents after Lincoln used the Cottage as a summer retreat.

“This was a very important place for Lincoln because you could get away from the press of the crowd,” he said. “And the design of the house was very well situated to get the summer breezes. The whole south side of the house opens up for some accentuated cross breezes from off this long hill.”

The site also is closely connected to two separate assassination attempts en route to the Cottage, one on Abraham Lincoln and the other on his wife, Mary Todd Lincoln.

“(Mary Todd Lincoln) recovered, it is believed, in one of the rooms off the one where Lincoln wrote the Emancipation Proclamation,” Stull said.

President James Buchanan had used the dwelling before Lincoln, from 1857 to 1861, Stull noted. After Lincoln, Presidents Rutherford B. Hayes and Chester A. Arthur used the facility. It served as a chief executive retreat until 1885.

As the legacies of the nation’s presidents are compared and contrasted, so too, apparently, will be the presidents’ cottages.

While working at President Lincoln’s Cottage, Stull’s research team was approached by an officer of the group responsible for President Grant’s Cottage. Rogers and Stull this summer did a preservation-style exterior scan of Ulysses S. Grant’s retreat near Saratoga Springs, N.Y. Stull and Rogers will return next summer to complete the interior scans.

“I’m less interested in what they liked about them than what it said about the society they were living in,” he said. “That’s really my research question as a social scientist: ‘What is society like?’ Looking at two presidential cottages is like looking at a very specific aspect of society, but they are one of the manifestations of how the political elite lived.”