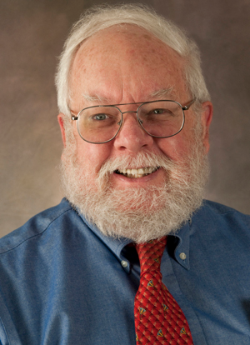 
George F. Feissner, who served SUNY Cortland for 38 years, retired on Oct. 3. He was designated professor emeritus of mathematics.

A native of Freeland, Pa., Feissner earned a Bachelor of Arts in Mathematics and a Master of Science in Mathematics from Lehigh University in Bethlehem, Pa., where he also captured the Robert W. Blake Prize and the Alumni Junior Prize in Arts and Sciences. He received a doctorate in mathematics from Cornell University, where he was a teaching assistant to undergraduates.

Feissner also taught for two years as an assistant professor at SUNY Potsdam.

Feissner joined SUNY Cortland’s Mathematics Department in 1972 as an assistant professor. He subsequently was promoted to the rank of associate professor and, in 1986, to professor. He chaired the department from 1995-98 and served as interim chair during 2008.

He wrote a two-volume study guide to accompany the textbook Calculus, written by James Hurley of the University of Connecticut and published by Wadsworth, Inc.

In 2001, he presented a paper and chaired one session at the Eighth Czech-Polish Mathematical School Conference in Usti nad Labem, Czech Republic.

In 1983, he was among the inaugural class of faculty, librarians, administrators and students to be inducted into the new Cortland Chapter of the interdisciplinary honor society Phi Kappa Phi and the arts and science honor society Phi Beta Kappa. His academic affiliations also included membership in Phi Eta Sigma, Pi Mu Epsilon, Pi Delta Epsilon, the Mathematical Association of America and the American Mathematical Society. He served on the advisory committee that established a chapter of Phi Eta Sigma, the freshman honor society on campus, and later served as faculty advisor to the chapter.

He resides in Cortland.