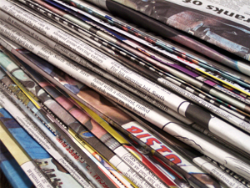 
The advantages, disadvantages and potential impacts of a rapidly changing media landscape will be explored during a Community Roundtable on Thursday, Dec. 2, at SUNY Cortland.

The panelists will include: Evan Geibel, assistant to the publisher at the daily newspaper, The Cortland Standard; David Hollenback, a SUNY Cortland associate professor of communication studies; and Bob Lloyd, a professor of practice at Syracuse University’s S.I. Newhouse School of Public Communications.

They will discuss “The Future of the News Media” from 8-9 a.m. in SUNY Cortland’s Park Center Hall of Fame Room. Refreshments will be served at 7:45 a.m. A question-and-answer period will follow.

Sponsored by the President’s Office and the College’s Center for Educational Exchange (CEE), the Community Roundtable is free and open to the public.

How news is defined and experienced continues to change rapidly. Newspapers, traditional television and radio have increasing competition from cable outlets, the Internet, blogs and even cell phone cameras. The panelists will analyze what these changes mean for local, national and international newsgathering. They will offer their predictions about whether newspapers will change or vanish.

Geibel graduated from Cortland High School and earned a degree in political science from Bucknell University in Lewisburg, Pa. He worked at The Cortland Standard as a contributing writer and staff reporter for two years covering the City of Cortland, the Town of Cortlandville and Cortland County government. Since then, Geibel has gained experience in every department at the newspaper and currently works alongside Publisher Kevin Howe.

Hollenback, who joined SUNY Cortland in 1987, has a doctorate from University of Michigan. His specialties are film, radio and television production; media writing; media theory, aesthetics and criticism; and media history. He also earned a Master of Arts in Radio-Television-Film and a Bachelor of Arts in English language and literature from Michigan.

Before he entered academia, Lloyd spent 20 years advancing from a reporter to executive editor at three daily newspapers, the Fort Worth Star-Telegram, the former Syracuse Herald-Journal and the Erie (Pa.) Times-News. He earned a bachelor’s degree from the University of Texas and a master’s degree from Syracuse University.

The Community Roundtable series provides programs on diverse intellectual, regional and cultural topics of interest to College faculty and staff and community members. Each roundtable is held on the first Thursday of the month. Parking in the Park Center lot is open to the public during the roundtables.

For more information, contact the CEE at (607) 753-4214 or visit www2.cortland.edu/centers/cee/community-roundtables/.