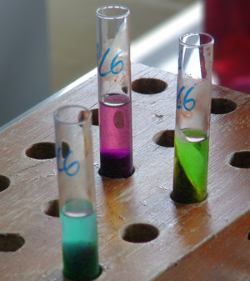 
SUNY Cortland will conclude a series of lectures, geared to pique curiosity about chemistry relating to health, the environment, energy and other hot-button topics, with a presentation on Monday, Nov. 15, by Margaret Logan, an associate professor of chemistry at the College at Brockport.

Logan will present, “Synthetic and Mechanistic Aspects of Palladium-Catalyzed Aryl Chloride Reactions,” at 3 p.m. in Sperry Center, Room 106, as part of the series titled, “Current Research in the Chemical Sciences: Stars to Cells to Green Catalysis.”

Sponsored by the Chemistry Department, the Chemistry Club and the Campus Artist and Lecture Series, the lecture and post-lecture discussion is free and open to the public. A pre-lecture light reception will be held at 2:40 p.m. in the first floor lobby of Sperry Center outside Room 106. An hour-long post-lecture discussion will begin at 4 p.m. in the Bowers Hall first floor lounge.

“Palladium-catalyzed reactions of aryl chlorides include hydrodehalogenation, and carbon-carbon, carbon-nitrogen, and carbon-oxygen bond-forming reactions,” said Logan, who joined the College at Brockport in 2000 and is conducting research on this area of chemistry.

The work she will describe explores synthetic and mechanistic aspects of the hydrodehalogenation reactions of aryl chlorides using palladium catalysts with biphenyl ligands developed by the Buchwald group.

“In this context, studies of both the hydrodehalogenation and amination reactions were performed to provide evidence for the nature of the active catalyst: that is, whether it is homogeneous or exists as nanoparticles,” Logan noted. “These studies were performed in both traditional solvents and in phosphonium salt-derived ionic liquids.”

Since 2000, in collaboration with summer research students and students doing independent research projects, Logan has studied the synthesis and evaluation of novel diaryl telluride antioxidants and the development of homogeneous catalytic systems for application to remediation of aryl chlorides such as PCBs.