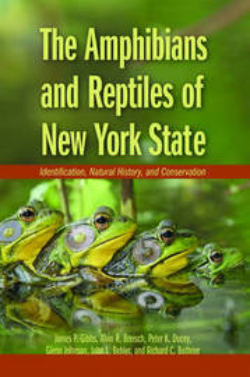 
Alvin R. Breisch, one of New York state’s foremost authorities on the study and protection of endangered species, will speak on Thursday, Oct. 21, at SUNY Cortland.

He will address the evolving public attitude toward endangered species from scientific, historical and conservation perspectives.

The author or co-author of dozens of scientific and popular books, chapters, articles and technical reports, Breisch has given more than 100 presentations at professional conferences, symposia and university campuses.

He was employed by the New York State Department of Environmental Conservation from 1980 to 2009, most recently as a senior wildlife biologist in the Endangered Species Unit.

In his efforts to learn about and protect the plants and animals of this region, Breisch has collaborated with fellow scientists from national, state and local agencies, conservation organizations and numerous colleges and universities. He has been an especially strong ally of SUNY faculty and students, sharing his expertise and joining them on many scientific and educational projects.

Although he has worked with a great spectrum of the species including trees, snails, butterflies, birds and bats, a central focus of Breisch’s efforts in research and conservation has been amphibians and reptiles. He was the driving force behind New York’s impressive Amphibian and Reptile Atlas, which documented the status and geographic distributions for more than 70 species. Throughout his career, he has been instrumental in raising the public’s awareness of these fascinating and important animals.

The talk is sponsored by the Campus Artist and Lecture Series, the Biological Sciences Department, the Biology Club, and the biological honor society Beta Beta Beta.