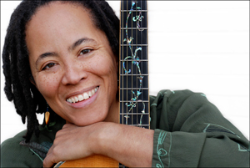 
Southern singer and songwriter Deidre McCalla will speak and perform a blend of folk, country, rock and pop in a concert during her visit to SUNY Cortland on Friday and Saturday, Oct. 8-9.

The lecture and concert are presented by the Campus Artists and Lecture Series (CALS).

A single parent residing in Georgia with her son, McCalla will lecture on “Outside the Lines: Reflections on Race, Gender, Sexuality, Art, Parenting and Politics” on Friday, Oct. 8, at 4 p.m. in the Corey Union Exhibition Lounge. Co-sponsored during Family Weekend by the Multicultural Life Office, the talk is free and open to the public.

McCalla’s performance will be held at 8 p.m. in the Corey Union Function Room on Saturday, Oct. 9. The event will feature an ongoing dessert reception. Admission is $3 for all students and $5 for general admission. Children 10 and under will be admitted free of charge.

Tickets may be obtained through the Campus Activities and Corey Union Office, Corey Union Room 406, or at the door one hour prior to the performance. For more information on tickets, call (607) 753-5574.

“Playing For Keeps” is an apt title for her latest CD. From the moment McCalla takes the stage, her engaging presence and music  seize the listeners by the heart and do not let go.

She came of age in the fiery blaze of New York City’s folk heyday, a time when Greenwich Village clubs were filled with singers like Dylan, Baez and Ochs; a time when Motown ruled the top of the charts and the streets of America screamed with anger and civil unrest. Her first album, “Fur Coats and Blue Jeans,” was released when Deidre was 19 and a student at Vassar College. With a theater degree tucked under her belt and an acoustic guitar tossed in the back of a battered Buick station wagon, McCalla hit the proverbial road and never looked back. She later majored in jazz guitar at the Wisconsin Conservatory of Music and released three albums with the pioneering women’s music label, Olivia Records.

A much beloved performer in both folk and women’s music circles, McCalla has shared the stage with a long list of notables who include Suzanne Vega, Tracy Chapman, Holly Near, Odetta, Cris Williamson, and Sweet Honey in the Rock. With five critically acclaimed albums to her credit, she remains the ever-seeking road warrior, her words and music chronicling our strengths and weaknesses and celebrating the power and diversity of the human spirit.

McCalla taught performance at Warren Wilson College’s Swannanoa Gathering. Her work has been published in Home Girls: A Black Feminist Anthology, The Original Coming Out Stories, and Chrysalis: A Feminist Quarterly, and she is featured in The Power of Words: A Transformative Language Arts Reader. She is a member of American Federation of Musicians (AFM) Local 1000 and the North American Folk Alliance.

More details about McCalla and her performance can be found on her website at www.deidremccalla.com.