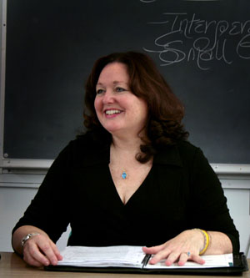 At the first lecture on Sept. 15, Kathleen Lawrence, a SUNY Cortland associate professor of communication studies (pictured above), will present “Advertising Our Goods: Women’s Fauxlution as Nurturer, Housekeeper, Entertainer, Provider and Seducer.”

Lawrence’s expertise on the Barbie doll in American culture has resulted in her earning guest spots in national and international print and broadcast media.

The 2009 recipient of a SUNY Chancellor’s Award for Excellence in Teaching who received a doctorate in speech communication from Indiana University, Lawrence will address the rhetorical elements of advertising that rely on the images of women to lure consumers. The evolution of these depictions will be examined from historical and social perspectives and deconstructed for their inherent cultural themes and values.

Ellen Gruenbaum, professor and chair of the Anthropology Department at Purdue University, will speak on “Secrets, Fear, Honor and Outrage: Challenges to Abolishing Female Genital Cutting” on Sept. 29.

By presenting specific cultural contexts and human experiences with a deep knowledge of the tremendous variation of the practice and meaning of female circumcision, Gruenbaum’s talk provides an insightful analysis of the process of changing this complex, highly debated practice.

On Oct. 13, the series will host “A Reception to Celebrate International Women” from 4-5:30 p.m. in the Brooks Museum in Moffett Center, Room 2126. The International Awareness Club, which is co-sponsoring the event, will provide a display area with information about some amazing women who have made a real difference in the world. Those who attend the reception will have the opportunity to walk through the display and talk with members of the club about their research.

On Feb. 23, Ibipo Johnston-Anumonwo, a SUNY Cortland professor of geography, will address “Do Women Work Close to Home? Gender, Race and the Journey to Work in the U.S.”

She will attempt to reframe the scholarly inquiry about if and why female workers have shorter commutes than men. Her presentation draws upon research on commuting in varied U.S. metropolitan areas.

Johnston-Anumonwo was honored with a 2010 Chancellor’s Award for Excellence in Scholarship and Creative Activities. A 22-year faculty member, she has distinguished herself in the fields of urban geography, African studies and geographic education.

Judith van Buskirk, a SUNY Cortland associate professor of history, will present “The Glam Girls and the Studios: Stars of the Early Silver Screen as Workers” on March 23.

“We tend to think of the great actresses of the silver screen as somewhat vacuous, pampered dolls,” van Buskirk said. “But many were trailblazers in the movie business, taking on the big studios and risking their careers on social issues.”

Van Buskirk, who has a doctorate from New York University, has focused her research on the involvement of women and African Americans in events surrounding the American Revolution.

Throughout the 20th century, the figure of the veiled Muslim woman served in American public culture as a powerful emblem embodying the difference between a “civilized Self” and an “Islamic Other,” according to Davila. He will discuss how, all too often, this “globalized Muslim woman” becomes a means by which larger political and economic agendas are obscured in media discourses.

A SUNY Brockport graduate, he earned a Ph.D. in Arabic studies from Yale University in 2006. His areas of specialization are Arabic language and Arab culture; the cultural heritage of al-Andalus; singing slaves and the courtly music of al-Andalus. His research was supported by a 2005-06 Fulbright-Hays Fellowship for Dissertation Research in Morocco, a 2004-05 Fulbright Fellowship for Research in Morocco, and a 2003-04 Graduate Research Grant from the American Institute for Maghreb Studies.

The 2010-11 Brooks Lecture Series is sponsored by a grant from Auxiliary Services Corporation (ASC) and the Cortland College Foundation. For more information, contact the lecture series organizer and Brooks Museum Director Sharon R. Steadman at (607) 753-2308.