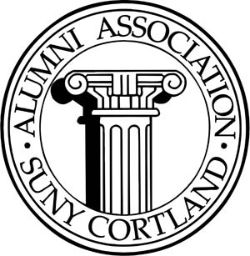 
Edward H. Olivari ’49 and John Reardon ’50 will receive the Outstanding Alumni Volunteer Award at a luncheon being held during the SUNY Cortland Alumni Reunion.

The Alumni Luncheon, set for noon on Saturday, July 17, will be held in the Corey Union Function Room. Reservations are required for this popular event and can be made by contacting the Alumni Affairs Office at (607) 753-2516.

The award was established by the SUNY Cortland Alumni Association in 1999 to honor Cortland graduates who have been exceptional in their engagement with the College, donating countless hours of their time to improving alumni relations with the College. 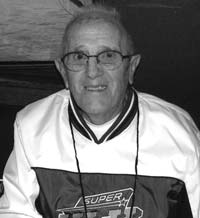 A physical education major at SUNY Cortland, Olivari worked in the White Plains Public Schools from for 32 years until his retirement in 1982. During the last 14 years of that period, he also worked part-time for the New York Giants. Then he went to work on a full-time basis in the Giants Public Relations Office from 1983-96.

Always a loyal and proud Cortland alumnus, Olivari arranged for the alumni association to annually receive 250-300 tickets to the Giants-Jets pre-season game in the Meadowlands. Over its six-year run in the late 1980s and early 1990s, the alumni event was a perennial sellout and with its grand tailgate before the contest became one of the most popular of the association-sponsored functions.

Olivari used his close relationship to the NFL team to secure autographed footballs and other Giants’ memorabilia that were raffled and raised thousands of dollars for a variety of SUNY Cortland alumni functions.

One of the many beneficiaries of Olivari’s generosity has been the Post-World War II Classes Reunion. An Army veteran, he has been an active participant and supporter of the annual event since its inception in the 1990s. The funds he helped to raise put the beloved reunions on secure financial footing.

Leading up to 2009, Olivari directed his enthusiasm and creativity towards the 60th reunion of the Class of 1949. As event co-chair, he personally contacted his classmates many times to urge their attendance at the 2009 Reunion Weekend. His indefatigable efforts led to an impressive 45 percent showing by the Class of 1949 members. Olivari created a photo calendar featuring the Class of 1949 that was distributed free of charge to all the attendees, at the same time he supplied college caps, blinking pins and other collectors’ items.

In nominating Olivari, his classmate, RoseMarie Kleinspehn ’49, cited “Ed’s faithfulness, enthusiasm and unselfish hard work on behalf of the College” as traits worthy of the award.

A member of Delta Kappa while a Cortland undergraduate, Olivari earned a master’s degree from Columbia University Teachers College and his director’s certification from New York University. He and his wife, Carmela, reside in Cortlandt Manor, N.Y. They have three children, Ed ’76, Nancy ’79 and Carol.

In retirement, he still helps scout college players for the Giants, many of whom have been drafted by the organization. 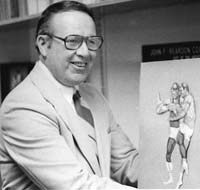 SUNY Cortland alumni have always been in good hands with John Reardon. An accomplished cartoonist, he has drawn and then donated thousands of images over the past half century that have celebrated the people and personalities near and dear to his alma mater.

For years, the Bessie L. Park 1901 Center conference room, now the Hall of Fame Room, featured a collection of Reardon’s three-dimension paper reliefs depicting athletes in action in every sport the College offered at the time.

At the first-ever Post-World War II Reunion in Myrtle Beach, S.C., in the 1990s, Reardon surprised each of the 75 participants with an individualized, 12-inch by 18-inch portrait depicting the graduate in a pose related to his or her sport or interest while a Cortland undergraduate.

His talents included making intricate figures using peanut shells for torsos and adding wires for appendages, hair and whatever else was needed to create a 3-D caricature that became a treasured keepsake for the subject.

“John was selfless to all requests that the College made for his talents,” explained RoseMarie Kleinspehn ’49, who nominated him for the honor. “John had a big heart and shared it with all of his who loved him back.”

A 1978 inductee into the C-Club Hall of Fame, Reardon grew up in New Rochelle, N.Y., where he was the high school yearbook art editor. He served in the same capacity at SUNY Cortland, where he co-captained the football team, was a lacrosse defenseman and a heavyweight in wrestling.

He taught and coached in Orchard Park, N.Y., where he started the wrestling program, Valley Stream, N.Y., and Roslyn, N.Y., before beginning his 27-year career at North Shore School District in Glen Head, N.Y. He retired in 1983 as district director of physical education and athletics.

He and his wife, Winnie, moved to East Aurora, N.Y., where he substitute taught, volunteer coached and became an award-winning woodcarver.