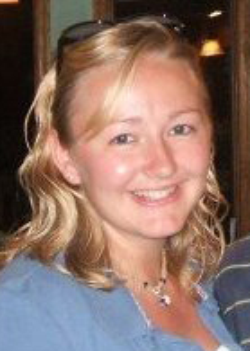 
Rho Phi Lambda, the national honor society in the field of recreation, parks and leisure services, will recognize Lindsey J. Brown, a recent graduate from SUNY Cortland, as the 2010 Outstanding Graduate Student.

She was chosen by representatives of the 25-year-old, Florida-based honor society from among several applicants from institutions around the country for one of four Rho Phi Lambda awards, according to Donna K. Lindenmeier, Rho Phi Lambda’s national vice president and secretary. The three other awards presented for 2010 were the Chapter Incentive Award, the Outstanding Undergraduate Student, and the Leadership and Service Award.

Brown of Cortland, N.Y., will formally accept the award during the National Recreation and Park Association Congress and Exposition from Oct. 25-29 in Minneapolis, Minn.

She graduated with her master’s in recreation from SUNY Cortland on May 21, having previously earned a bachelor of arts in sociology from SUNY Geneseo.

“Recreation is showing people what they can do and how they can do it,” Brown asserts. “It’s a very empowering experience. Being able to show other people how they can recreate is very important to me.”

“Lindsey has served as the graduate assistant for the highly successful SUNY Cortland Community Bike Project,” commented Professor Lynn Anderson, who chairs SUNY Cortland’s Recreation, Parks and Leisure Studies Department, explaining why Brown received the kudos. “In her role, she helped us transition the bike project to a new type of sustainable program where students check bikes in and out. Lindsey was instrumental in developing the program and managing its implementation.”

“Lindsey Brown has been an amazing student, researcher and teaching assistant,” added Assistant Professor Edward Hill, who taught a course to Brown and notes she has maintained a 3.96 grade point average. “She is the type of graduate student you hope to one day have as a colleague.”

“When it was first started, yellow bikes were out all over campus and there were issues with bikes not being cared for and people not taking ownership of them. Brandi Crowe, a graduate assistant (who earned her master’s degree this year), and I put our heads together and came up with a plan that would be implemented by me as a graduate assistant in the 2009-10 year. Students, faculty and staff now sign a consent form to take a yellow bike and a helmet for three days. I think the checkout is going to turn into a one-week one.”

“Students can come check them out and it doesn’t cost them. There is also a semester-long rental program with a higher-end bike, also called the red bike program. The fee includes the lock and key, helmet and maintenance. If you have a flat tire, you can bring it in and we’ll fix it up for you. I think the students who have participated in the red bikes program think it is a very good deal, and it is popular with the students who have traveled here from a very long distance and don’t have transportation, including some of the international students.”

In 2009, Brown was inducted into Alpha Eta, SUNY Cortland’s six-year-old chapter of Rho Phi Lambda. Members must show evidence of academic excellence in scholarship, leadership and service to campus or community, rank in the top 15 percent of their class and maintain a minimum GPA of 3.2 in professional courses.

She served the Recreation, Parks and Leisure Studies Department as coordinator of its 59th annual SUNY Cortland Recreation Conference and organized the conference’s first Research Symposium featuring 12 formal, peer-reviewed research presentations. A published author of research conducted in her field, Brown has delivered 14 presentations about the Community Bike Project and other recreation subjects on campus, in the region and in New York state at professional conferences.

The College’s Institute for Civic Engagement presented her with its Leadership in Civic Engagement Award. At school, she also has participated in the SUNY Cortland Recreation Association. In the community, she served as program coordinator for the innovative afterschool program at Barry School called the League 56 Academy. Brown and the program leaders she managed used findings on the children's resilience in their own research.

“Cortland has an amazing recreation program, a diverse faculty and many opportunities for students,” observed Brown, a 2004 graduate of Mahopac (N.Y.) High School who is the daughter of Susan and Neil Brown.

“My most empowering experience was being a teaching assistant in many undergraduate classes in  the recreation department,” said Brown, who this summer supervises recreation interns at various locations for SUNY Cortland’s Recreation, Parks and Leisure Studies Department. “That gave me a lot of responsibility. I was able to oversee undergraduate students’ work and it kind of gave me a test run of becoming a professor.”

“Being able to supervise student interns and undergraduates has been a very rewarding experience so far,” Brown said. “I will be able to have my own classroom in the fall and that is very exciting to me.”

“Lindsey is creative, effective and an excellent leader,” Anderson asserted. “She has been an asset to the College and will be a marvelous professional in the field of recreation, parks and leisure studies.”

Formed by the merger of the two existing academic honor societies, Rho Phi Alpha and Sigma Lambda Sigma, Rho Phi Lambda was incorporated in the state of Florida in 1985 with 18 charter chapters. The organization strives to recognize superior major students, encourage the development of professional standards, stimulate the personal development of individual members’ professional growth, promote a sentiment of amity among the students of the profession, and to recognize those persons who have made outstanding contributions to the field.