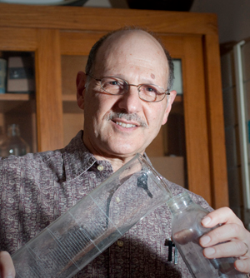 
David F. Berger, a professor in the Psychology Department at SUNY Cortland, was honored with the Chancellor’s Award for Excellence in Faculty Service at the 2010 Undergraduate Commencement on Saturday, May 22, in the Park Center.

He becomes the seventh SUNY Cortland recipient of the award, which recognizes his extensive service and leadership in the area of faculty governance since his appointment to the Psychology Department faculty in 1968. Through the decades Berger has witnessed and actively contributed to the evolution of the present identity of SUNY Cortland.

“Berger has served as a Faculty Senator for some 12 terms,” noted the Nominating Committee. “He started his career during turbulent times and quickly established his voice as a faculty advisor. He has demonstrated supreme integrity and deep conviction in his more than 43 years at SUNY Cortland.”

In 1970, when SUNY Cortland students took over the Miller Administration Building in protest of the Kent State shootings, Berger was the sole faculty member who entered the building to speak directly with the students. Despite facing significant criticism from his fellow faculty colleagues, Berger believed strongly that, as Faculty Senate advisor to the student organization, it was incumbent upon him to attempt to keep open the lines of communication between students and administrators. This technique proved effective, and no bodily harm or physical damage occurred.

Four decades later, and with more than 37 years of service to Faculty Senate and numerous other committees, Berger exemplifies service and leadership in the area of faculty governance.

At the SUNY-wide level, Berger has served on and chaired the Senate Committee on Health Sciences and Health Services and the Senate Graduate and Research Committee.

Berger currently is conducting research with Psychology Department colleague John Lombardo on attention deficit hyperactivity disorder, which has important implications for public health policy and problems related to the consequences of ADHD for schools and the criminal justice system. Previously, he was a Fellow with a small group of international scholars exchanging knowledge about attention deficit/hyperactivity disorder from genetics to treatment in Oslo, Norway.

Among his many contributions as a Cortland community volunteer, Berger is a member of Blue Ribbon Committee — Cortland Community Assessment Team and the Sub-Committee on Health. He was involved in the establishment of a new clinic in downtown Cortland to provide community access to affordable dental services and, most recently, has focused the Committee on the problems associated with childhood obesity and behavioral health.

“‘Service’ has been Dr. Berger’s credo throughout his past 43 years on the SUNY Cortland campus,” stated the committee. “Moreover, Dr. Berger’s strong sense of loyalty to SUNY Cortland has been unfalteringly present in all that he has accomplished. Rarely thinking twice about serving, he never hesitates to ‘go the extra mile,’ to step in wherever and whenever needed.”

A resident of Cortland, Berger and his wife, Michele, have three children and nine grandchildren.