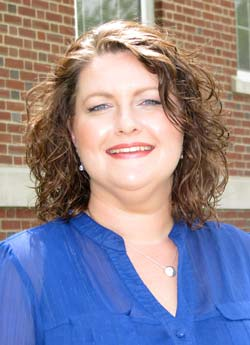 
“Adult life for me has taken a twisted path.” said Rachel Alexander of Willseyville, N.Y., who will graduate from SUNY Cortland on Saturday, May 22, with a Bachelor of Science in Childhood Education: Humanities.

The national selection committee was impressed with Alexander’s amount and variety of leadership activities and placed her at the top of eight winners from a pool of 107 entries.

“The path has led me to a place where I will soon benefit society by teaching our children, at the same time gaining personal fulfillment, respect and fair compensation,” said Alexander, the mother of two boys, who was admittedly sidetracked for years by the minutiae of everyday life from gaining what was truly important to her.

“I knew that I needed to go back to school, but I had many fears so I put the idea out of my head and focused on other pursuits,” said Alexander, who spent eight years working several entry-level jobs while doing extensive volunteer work.

She now views the latter as a way of avoiding her fears of returning to college. Each of her volunteer efforts centered largely on teaching and the experience and maturity gained during those years helped her to be an excellent student.

Alexander, who will graduate with a 4.04 GPA, has made the President’s List each semester and has received multiple awards for academic achievement, including the Senior Academic Achievement Award and Outstanding Non-Traditional Student Award. She is a member of the Tau Sigma and Alpha Sigma Lambda honor societies and has consistently ranked in the top one percent of more than 800 students who are studying early childhood/childhood education.

She looks forward to teaching at the elementary level and has been offered a position with the St. Lucie County School District in Fort Pierce, Fla., where she will relocate with her family this August.

“If there is any moral to my story, it is that facing one’s fears is crucial, and can make all the difference in life,” concluded Alexander.