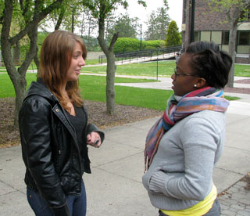 
Sarah Gentillon, one of several Haitian students at the College, joined the ranks of those on campus providing aid to the victims of the earthquake that struck her impoverished Caribbean island nation in early January.

“I was here for the winter session when I first heard about the earthquake,” says Gentillon, who is president of the Caribbean Student Association. “It pained my heart and soul to see that happen to my country because Haiti is like no other country on this side of the globe. It’s a very poor place where people struggle to eat and fend for themselves every day. The earthquake made everything worse.”

From residence halls to student organizations, the campus has unified in a semester-long effort provide Haiti relief.

More than 750 students and community members filled the Corey Union Function Room on April 30 for the Student Activities Board’s Rock for a Cause benefit concert, featuring Grammy award winner Colbie Caillat. Ticket sales raised $3,735 with an additional $212 collected from raffle ticket sales and a donation basket. All proceeds were donated to the Haitian Orphan Rescue Fund of the Pittsburgh Foundation.

Joseph Piliero, a resident assistant in Hayes Hall, was inspired by the hardship in Haiti and raised almost $100 for the American Red Cross.

“I went door to door with a donation cup,” says Piliero, a senior sociology major from Hampton Bays, N.Y. “Students were quite generous, some donated spare change and others upwards of five dollars.”

The Health Promotion Office also spearheaded a successful campaign during Body Appreciation Week, Feb. 22-26, urging faculty and staff to donate $1 per day for the right to dress casually.  This, combined with two Coffee House events featuring student musicians and poets, raised more than $1,000.

Not all of the campus’ donations were monetary.

The Biology Club and WSUC teamed up with the American Red Cross to create the most successful blood drive in the past five years. Ninety-four productive units were donated, a portion of which was sent directly to Haiti.

This semester, the Student Government Association created and funded a scholarship for two Haitian students to study at Cortland.  This augments an initiative made by the SUNY system in March to establish a tuition fund that allows Haitian nationals who attend SUNY schools to pay resident tuition rates through the spring of 2011.

“There’s one thing I admire about the Haitian people,” says Gentillon. “They never lose hope and faith.  Although they have lost their homes and family members, they still have hope for a better future.”