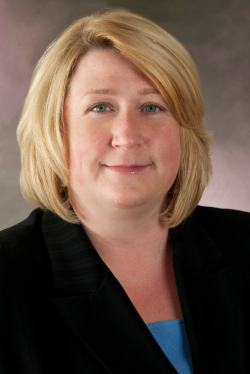 As associate provost, her leadership initiatives will foster cohesiveness and collaboration among departments, motivate and sustain the highest level of excellence in unit efforts and provide encouragement and support for ongoing professional development.

Van Der Karr previously fulfilled the duties of interim assistant provost for enrollment management from 2007-09. Before that, she had directed academic advisement since 2002. She joined SUNY Cortland in 2000 as coordinator of academic advisement and first-year programming.

She began her professional career in 1991 at SUNY Buffalo as a career services assistant in the Educational Opportunity Center. She also worked as a counseling supervisor at the Sexuality Education Center and a development intern at the University’s Independent Living Center.

She was honored with a National Service Day Recognition Award for Community Service in the City of Buffalo for her hospital advocacy on behalf of sexual assault victims.

She has served as an instructor at Syracuse University’s Higher Education Program and an assessment intern at Onondaga Community College’s Learning Support Center.

She received a master’s degree in counseling and educational psychology from SUNY Buffalo and a doctorate in higher education from Syracuse University.