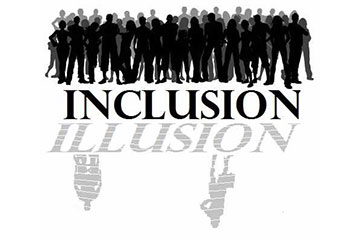 
Nigerian author Chimamanda Ngozi Adichie writes that she “would like to ask today that we should begin to dream about and plan for a different world. A fairer world” in her book, We Should All Be Feminists.

The highly acclaimed, provocative New York Times bestseller Ngozi Adichie’s philosophy is at the heart of the series of lectures, films and common readings planned by SUNY Cortland’s Cultural and Intellectual Climate Committee (CICC) for the 2017-18 academic year.

The series, titled “Incllusion,” will focus on inclusion as a fundamental condition for equity and human rights. All events are free and open to the public.

“Inclusion necessitates the recognition of ‘The Other’: those who are not ‘like us’ — against whom we form our identity and over whom we seek to maintain power and/or distance,” said CICC committee member Brian Barrett, a co-organizer of the series and a SUNY Cortland professor of foundations and social advocacy. “It requires that we think deeply and act inclusively with regard to who ‘counts’ as a human being and who belongs in ‘our’ community.”

“This is a discussion that pertains to matters of race and ethnicity, gender identity, social class, disability, sexual orientation and much more,” added CICC committee member and co-organizer Jena Nicols Curtis, an associate professor of health. “It is a discussion that can be informed by a broad range of disciplinary and cross-disciplinary perspectives. We invite you to participate in this and to contribute to the creation of a more inclusive campus community.”

Each year, participants are asked to view the series through the lens of one particular piece of literature. Ngozi Adichie’s We Should All Be Feminists is this year’s work suggested as the “common read.”

Born in 1977, Ngozi Adichie is a writer of novels, short stories, and nonfiction. In 2008, she was awarded a MacArthur Genius Grant. She wrote the award-winning Americanah. Ngozi Adichie was described in the Times Literary Supplement as “the most prominent” of a “procession of critically acclaimed young Anglophone authors [that] is succeeding in attracting a new generation of readers to African literature.”

Matthew Chambers, a professor at the University of Warsaw, Poland, will kick off the series on Wednesday, Sept. 13, with a talk that considers the role of nongovernmental organizations (NGOs) in the fields that produce literary and cultural works. His discussion, “NGO Cultures: Cold War Global Literary Institutions,” begins at 12:30 p.m. in Brockway Hall Jacobus Lounge.

Chambers asserts that the origins of NGOs such as International PEN, Amnesty International and UNESCO reside in cultural leftist or liberal internationalist theories of development and global peace. Yet the process of their institutionalization as NGOs has shifted those foundational imperatives into neoliberal cultural management programs. Collectively, Chambers refers to the institutional reach and potential influence of these organizations as “NGO cultures.”

“‘NGO cultures’ are both an informal set of relations between funded institutions and the broader public, and the cultures they produce through a formalized bureaucratic network with its own internal logic and imperatives,” Chambers said.

Adams serves as managing editor of the online journal Wagadu: Journal of Transnational Women’s and Gender Studies, which is based here at SUNY Cortland. The former president of the African Literature Association, her primary areas of research and publication are African/Diaspora women’s writing and Afro-German cultural studies. Adams served as director of the W.E.B. Du Bois Memorial Centre for Pan-African Culture, in Accra, Ghana, from 2005-2010. She also teaches as a visiting professor at the University of Ghana, Legon. She has lectured in numerous other African countries, including Kenya, Senegal, Benin, Congo Republic, Burundi, and Côte d’Ivoire. She is currently a member of the graduate faculty in African Studies at the University of Bayreuth, Germany.

In 1986 she co-wrote, with Carole Boyce Davies, Ngambika: Studies of Women in African Literature, one of the first books of literary criticism on African women authors. She is the author of other books published on African women writers, including playwright Efua Sutherland and novelist Ama Ata Aidoo. Adams is currently preparing an anthology of essays by Afro-Germans.

Chimamanda Ngozi Adichie’s “We Should All Be Feminists” will be screened as a TEDx talk on Tuesday, Sept. 26, at 4:15 p.m. in Brockway Hall Jacobus Lounge. Amazon.com describes the screened version of the campus common read as: “Drawing extensively on her own experiences and her deep understanding of the often-masked realities of sexual politics, here is one remarkable author’s exploration of what it means to be a woman now — and an ‘of-the-moment’ rallying cry for why we should all be feminists.”

Amber Jamilla Musser, associate professor of women, gender, and sexuality studies at Washington University in St. Louis, will deliver the College’s annual Van Burd Memorial Lecture on Tuesday, Sept. 26. Her talk, “Mickalene Thomas, Audre Lorde, and the Maternal Origin of the Universe,” begins at 5:15 p.m. in the Sperry Center Hobson ’61 Lecture Hall, Room 104. The event is part of this fall’s Distinguished Voices in Literature presentations by the English Department.

Musser’s monograph, Sensational Flesh: Race, Power, and Masochism (NYU Press, 2014), uses masochism as a lens to theorize different felt relationships to power. Musser also has published widely on race and critical theory, queer femininities and race, race and sexuality, and queer of color critique. Her current research project, “Brown Jouissance: Feminine Imaginings,” uses the aesthetic labors of women of color to re-imagine epistemologies of sexuality so that they focus on brown femininity. She has an M.S. in women’s studies from Oxford University and received her Ph.D. in history of science from Harvard University.

Title IX has described a previous screening of “The Hunting Ground” as “a startling expose of sexual assault on U.S. campuses.” The film will be shown at 4:30 p.m. on Tuesday, Oct. 3, in Sperry Center, Room 106.

SUNY Cortland members of Students Active for Ending Rape (SAFER) have organized a “Take Back the Night” march for Wednesday, Oct. 4. Meet at 8 p.m. on the Corey Union steps. The event encourages the campus community to act as sexual violence awareness advocates.

Poet Jericho Brown, the recipient of a Whiting Writers’ Award and fellowships from the John Simon Guggenheim Foundation, the Radcliffe Institute for Advanced Study at Harvard University, and the National Endowment for the Arts, will read from his work on Wednesday, Oct. 11. The event continues this fall’s Distinguished Voices in Literature presentations.

Brown, an associate professor of English and creative writing at Emory University, will begin at 5 p.m. in Brockway Hall Jacobus Lounge.  Brown’s first book, Please (New Issues 2008), won the American Book Award. His second book, The New Testament (Copper Canyon 2014), won the Anisfield-Wolf Book Award and was named one of the best of the year by Library Journal, Coldfront, and the Academy of American Poets. His poems have appeared in The New York Times, The New Yorker, The New Republic, Buzzfeed and The Pushcart Prize Anthology.

“Cold Fear: Gay Life in Russia” is a hauntingly beautiful and powerful documentary that gives an insight into the reality of life — particularly gay life — in Russia. The film will be screened on Tuesday, Oct. 24.

The documentary, which begins at 4:30 p.m. in Sperry Center, Room 106, tells how there’s fear on all sides, with many Russians equating gay behavior with semi-demonic practices. They believe homosexuality is a lifestyle choice and see it as a direct attack on family values, even as a poison that is corrupting society and weakening Russia. On the other side, many gay Russians live in fear of direct intimidation, persecution and violence — and even murder. This film gives ordinary Russians a voice as it exposes a world of widespread repression and extreme violence: a world of cold fear.

Jose Faus, an acclaimed artist and poet from the Kansas City area, will present Thursday, Oct. 26, on his current visual art, including murals that he produces in Kansas City neighborhoods to celebrate cultural heritage and diversity. His talk, titled “Art and Activism,” begins at noon in Brockway Hall Jacobus Lounge.

These murals are often produced with the assistance of neighborhood children and young adults as part of mentoring and education projects. Faus, who currently is president of the Kansas City Latino Writers Collective, also is involved with ArtKC’s Artist Inc program, which helps up-and-coming artists develop career strategies and navigate the business aspects of an artist’s life.

While discussing his art and these projects, Faus will weave in readings from his poetry.

The talk, which marks Latin History Month, is co-sponsored by the Economics Department and the Distinguished Speaker Series.

Award-winning author Jaimee Wriston Colbert will read from her work on Thursday, Oct. 26. Colbert, who won a gold medal in the Independent Publisher Awards for her Dream Lives of Butterflies, will begin at 4 p.m. in Brockway Hall Jacobus Lounge. The event concludes this fall’s Distinguished Voices in Literature presentations.

Colbert is professor of English and creative writing at Binghamton University. Her work, Climbing the God Tree, captured the Willa Cather Fiction Prize. Her book Shark Girls was a finalist for the USA Book News Best Books of 2010 Awards and Sex, Salvation, and the Automobile, achieved the Zephyr Prize. Colbert also wrote the linked story collection Wild Things. Her work has appeared in many journals, including The Gettysburg Review, New Letters, Prairie Schooner and TriQuarterly, and has been broadcast on “Selected Shorts.”

Hailed as the first and only feature film about gay life ever produced in communist East Germany, “Coming Out” premiered on the night the Berlin Wall opened, Nov. 9, 1989. The film will be screened at 4:30 p.m. on Tuesday, Nov. 14, in Sperry Center, Room 106.

Scott Moranda, SUNY Cortland associate professor of history, will provide a brief introduction about the attitudes toward homosexuality within 20th century socialist and communist movements in Europe.

“Coming Out” tells the story of a boy, Philipp, who was strongly attracted to his best friend, but he put that behind him in order to live within the “norm.” He meets a shy girl who falls for him, and soon the couple is sharing an apartment. But Philipp cannot deny his passionate desire for a young man. After years of repressing his sexuality, he finally accepts himself for who he truly is.

On Thursday, Nov. 16, for the sake of fostering a more interdisciplinary intellectual community among faculty, administrators and students, the campus will gather to discuss “Margins: An Interdisciplinary Keywords Conversation.”

The event, which begins at 5 p.m. in Brockway Hall Jacobus Lounge, features a roundtable with eight students and faculty members across a range of departments at SUNY Cortland discussing how this keyword (“margins”) is defined across different disciplines and intellectual domains. Each participant will prepare a 3- to 4-minute “lightning” presentation inviting the group to reflect on “How does this term operate in your discipline?”

“We have selected a critical ‘keyword’ around which we will discuss our different approaches to understanding our work and its significance in the world,” explains Laura Davies, an associate professor of English who directs the College’s Writing Program. “Inspired by Raymond Williams, we understand keywords as a vocabulary of culture and society, specifically “the vocabulary we share with others, often imperfectly, when we wish to discuss many of the central processes of our common life.”

“Yet upon closer reflection, we discover the many professional, cultural, and political assumptions embedded within our understanding of a keyword,” she said. “Thus, keywords provide an opportunity to think across disciplinary and methodological boundaries and to reassess the stakes of our intellectual work in the contemporary moment.

“We hope that the keyword we have chosen — margins — sparks a wide range of responses and engenders a conversation that moves across different disciplines, methodologies, cultural considerations and social contexts,” Davies said.

Spring activities for “Incllusion” will be announced at a later date.

By using a different intellectual theme each year, the CICC committee aims to generate common topics of discussion and to establish traditions of intellectual discourse on SUNY Cortland’s campus. The series encourages faculty and staff to infuse the theme into their course curricula, engage in classroom discussions and debates around the theme, and propose campus events or speakers on related topics.