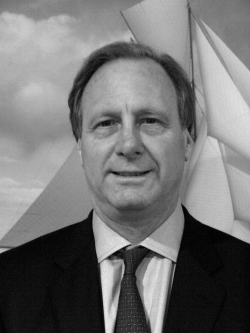 
Michael Morandi ’76, a successful Wall Street consultant who since 1996 has guided his own consulting firm, the Medalist Group, LLC, becomes the ninth inductee into the SUNY Cortland Academic Hall of Fame.

He will be recognized on Friday, March 26, when he will address the President’s List reception, an event honoring the College’s students earning the highest grade point averages the previous semester. The reception begins at 4 p.m. in the Corey Union Function Room.

Morandi became engrossed in environmental concerns as a scholarship graduate student in political science at SUNY Albany. He worked full time at the Department of Environmental Conservation during the day and attended class at night. He was involved with writing the regulations to implement the then-new State Environmental Quality Review Act, which established the environmental impact statement requirements.

He earned a master’s degree in political science from SUNY Albany in 1978. He worked as a policy coordinator for Pacific Gas & Electric Company in California, where he was involved in the development of a comprehensive statewide energy plan for Gov. Jerry Brown’s new California Energy Commission.

Morandi earned a Master’s of Public Administration from Princeton University’s Woodrow Wilson School of Public and International Affairs, which he attended on a fellowship. While there, he was a legislative intern focused on energy policy for New Jersey Sen. Bill Bradley.

In 1983, he joined Manufacturer’s Hanover Trust and worked in investment banking in the new area of derivatives or interest rate swaps. The following year, he joined Drexel Burnham Lambert, where he stayed until 1989, assisting in building its interest rate products group while serving as head of sales and marketing.

Morandi and a few partners left Drexel in December 1989 to form their own interest rate products group in connection with New England Mutual Life Insurance Company. Morandi ran international operations out of an office in London, England. He soon joined Lehman Brothers for a year as a senior vice president in the interest rates product group before being hired by Citicorp to run its financial institutions group out of New York.

He and his wife, Pamela Kogen, a professional artist, reside in Princeton, N.J.