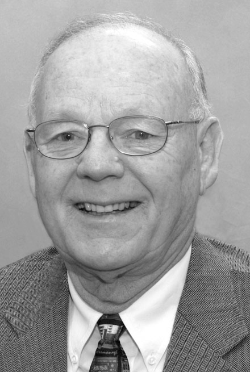 Gallagher, the former mayor of Cortland, joined the College Council on Jan. 3, 2008, to complete the term of Patrick McHugh. Gallagher will serve as the chair until that term ends on June 30, 2011. Fowler had been the College Council chair since Oct. 30, 2006.

The 10-member College Council has certain supervisory responsibilities at SUNY Cortland which include: recommending candidates for appointment as president of the College; reviewing major plans for operation of the College properties; reviewing proposed budgets requests; fostering the development of advisory citizens' committees; naming buildings and grounds; and making or approving regulations governing the conduct and behavior of students.

He began his professional career with the Commercial Credit Corp. and the General Finance Corp. in Syracuse, N.Y. From 1962-69, he worked for Smith Corona Corp. in DeWitt, N.Y. He co-owned and operated Crown City Distributors in Cortland from 1969-86 and Cortland Paper Products in Cortland from 1986-93.

Gallagher served on the YMCA Board of Directors for 38 years and is a past president. His 25 years on the Cortland City Water Board include serving as chair. His is a Past Exalted Ruler and a Board of Trustees member of the Cortland Elks Club. He was a founding member of Leadership Cortland and the Cortland Business Network.

The 2007 recipient of the Boys Scouts of America’s Cortland County Distinguished Citizen Award, Gallagher served on the steering committee for the 25th Empire State Games co-hosted by Cortland in 2002. He serves on the advisory board of the Cortland Regional Sports Council, the McDonald Sports Complex Board of Directors, the Cortland Regional Medical Center, the Tompkins-Cortland Community College Foundation, the United Way of Cortland County and the Tompkins County Trust Company Economic Development Board.