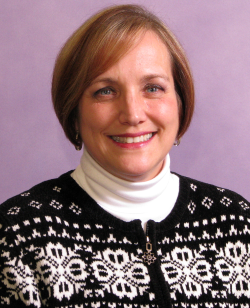 
Sheila Gregoire, a secretary II in the Dean of the School of Education Office since 2003, was named the recipient of the prestigious 2009 President's Award for Excellence in Classified Service.

The award was created in 2002 to annually recognize one individual "for extraordinary achievement and to encourage the continuation of excellence." Nominees must be current SUNY Cortland full-time classified service employees with at least three years of continuous service. A supervisor, co-worker or other college community member may make nominations.

"Sheila is a highly effective team builder who treats all employees and students fairly, maintains high morale and is dedicated to providing excellent customer service," writes Marley Barduhn, interim assistant provost for teacher education, who nominated Gregoire for the honor.

"She is one of the most flexible and creative employees on campus," added Barduhn, noting Gregoire's ability to effectively serve both the interim dean of the School of Education and the interim provost for teacher education. Her skills also shined during the expansive reorganization of offices for the Education Building and Child Care Center construction and the Cornish Hall renovation.

"Sheila seamlessly coordinated the entire move of faculty, people and furnishings from the Cornish Building to the new Education Building without batting an eye and with her usual wonderful sense of humor."

"People know that she cares about them and she gives them her undivided attention, even during peak times of stress. She is seen as the 'go-to' person who believes that not only do students come first, but so do faculty and staff."

A native of Endicott, N.Y., Gregoire graduated from Maine-Endwell High School, where she was a cheerleading team member.  She served in the U.S. Amy Reserves and retired in January 2000 with the rank of Sergeant First Class.

Prior to joining SUNY Cortland in December 1982 as a cashier in the Bursar's Office, Gregoire worked for the Broome County Developmental Center, both the New York State Department of Taxation and Finance and the Department of Motor Vehicles, and for SUNY Binghamton.

Gregoire left SUNY Cortland in November 1984 for a position with the New York State Department of Environmental Conservation, but returned to the College's Registrar's Office in April 2001 as an administrative aide. She was promoted to secretary II in April 2003 in the then-newly created School of Education where she has remained.

She and her husband, Harold, who works for the Tompkins County Probation Department, have been married for 26 years and reside in Cortland. They have two daughters, Colette, 21, who attends William Smith College, and Ashlie, 24, a Clarkson University graduate who lives in Princeton, N.J., and is employed by McNeil Consumer Heathcare in Philadelphia, Pa.