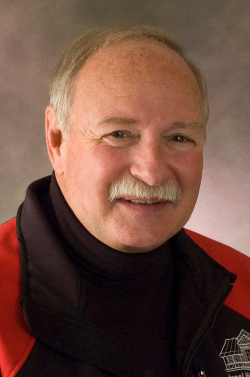 When Sheltmire took over, the scope of the position expanded to encompass supervision of all the College’s outdoor and environmental education facilities — the Outdoor Education Center, the Brauer Education Center near Albany and Hoxie Gorge Nature Preserve in Cortland County — with an added emphasis on developing grant proposals, increasing facility use and revenue and other initiatives.

During Sheltmire’s tenure, educational programming facility use at Camp Huntington increased more than 30 percent, approaching 9,000 user days for fiscal 2008-09 with the camp hosting as many as three different groups scheduled for the same period.

A crowning achievement, accomplished according to Sheltmire with the help of the outdoor education staff and the support of the campus faculty, administration and alumni, was the designation in 2004 of Camp Huntington (Pine Knot) as a National Historic Landmark by the U.S. Department of the Interior National Parks Service. Cortland remains the only SUNY campus to have a National Historic Landmark as part of its campus.

Sheltmire introduced the Raquette Lake Newsletter to keep supporters informed of developments at the Raquette Lake camps and presided over a significant increase in the Raquette Lake endowment through the generosity of a growing list of Friends of Raquette Lake. Under his stewardship, the historic Kirby Camp was renovated into a revenue-generating facility. Former sisters of Theta Phi refurbished and renamed the Glass Dining Room for M. Louise Moseley, the C-Club Hall of Fame honorary member and professor emerita of physical education. The Old Maid’s Cabin was formally renamed for Franklin E. Coolidge ’35, the late professor emeritus of education. When renovated in 2010, this last unrestored original building will serve as the director’s office and will be accessible to persons with disabilities.

Sheltmire obtained grants to upgrade equipment, complete building renovations, purchase boats and motors and replace and add summer and winter camping equipment. He worked with the College’s Information Resources Office to establish a nationally recognized, state-of-the-art, wireless communications system and technology classroom with a mobile computer lab made possible by a U.S. Higher Education Act Title III Grant. He introduced kayaks to the camp in 2001 and his canoe replacement and recognition program led to the addition of 26 new canoes. A new maintenance shop opened in Fall 2008. The Challenge Course was upgraded with new equipment and externally inspected and accredited.

Sheltmire served on several key campus committees, including the National Council on the Accreditation of Teacher Education (NCATE). In the Raquette Lake area, he was liaison with the Adirondack Museum and the Adirondack Architectural Heritage Association, the New York State Office of Parks, Recreation and Historical Preservation and the U.S. Department of the Interior National Parks Service.

Sheltmire is a 1983 recipient of the New York State Outdoor Education Leadership Award. In 2009, the College honored him as a role model, leader, problem-solver, visionary and dedicated professional of the highest caliber in the area of institutional service with its Excellence in Professional Service Award.

Before joining SUNY Cortland, he was professor and chair of the Health, Physical Education and Recreation Department at Morehead State University in Kentucky. In his seven years at Morehead State, Sheltmire helped to secure $1.08 million in grants from the Kentucky Department of Education, the Kentucky State Legislature, the U.S. Department of Health and Human Services and the National Collegiate Athletic Association. He inherited the struggling National Youth Sports Program at Morehead State and, with the help of the local community and schools, rejuvenated the venture. In 1994, the National Youth Sports Program designated the Morehead program as Most Improved in the Nation. His professional service earned him many accolades.

He began his professional career as an outdoor education instructor for the Syracuse Public Schools. From 1973-79, Sheltmire was an instructor and later an assistant professor in SUNY Cortland’s Department of Recreation and Leisure Studies.

He began his 14-year service on the faculty at the University of Maine at Presque Isle (UMPI) in 1979 as an associate professor and later a professor. He chaired the Division of Education/Health, Physical Education and Recreation from 1982-89 and coordinated recreation and leisure services at UMPI throughout his tenure.

While in Maine, Sheltmire also worked five years as a volunteer instructor trainer and outdoor education instructor for the Maine Department of Inland Fisheries and Wildlife. During the summers Sheltmire, a licensed master guide, was a back country ranger at Baxter State Park in Millinocket, Maine. He also assisted with the Caribou Adult Education Department.

After he retires, Sheltmire and his wife, Patti, will live in Maine.