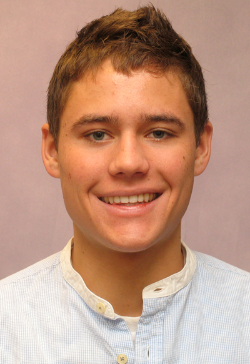 Malikowski of Fredonia, N.Y., was among only four students statewide to be honored with the $750 scholarship. Each awardee was selected competitively from his or her region by council members from the three other regions. Malikowski was presented with the scholarship during the ACT Fall Conference on Oct. 24 at the Otesaga Resort in Cooperstown, N.Y.

“I would like to express on behalf of students like me how grateful we are to have funds out there such as this scholarship,” Malikowski wrote in his application letter to trustees. “It feels great to know there are people who truly want to help us realize our dreams.”

The ACT for Excellence Scholarship recognizes the academic achievements of students at the state-operated campuses. ACT Award candidates, whose applications must be approved by the school’s College Council and signed by the council chair or college president, are required to have at least a dean’s list grade point average as of the last reporting period. The undergraduates are asked to describe their college experiences and activities beyond academics.

Malikowski, who has a 4.06 grade point average (GPA) and participates in the College’s Honors Program, will graduate in May 2011. He is preparing for the Medical College Admission Test (MCAT).

“I’m proud of my GPA not because it proves I’m ‘smart’ but because it shows that my interest in learning is sincere and that I’m obtaining the valuable intellectual tools a college education can provide,” he said.

“In my time at SUNY Cortland I have come to realize that good grades are not an ugly stress-monster hiding in the library,” the aspiring future physician said. “I found that quality marks are instead a natural byproduct of growing intellectual curiosity. This realization accompanied my explosive interest in biology and particularly in medicine.”

This semester, he is completing a student internship in the Pathology Laboratory at Cortland Regional Medical Center, where he assists in the gross preparation of a variety of biopsies and organ specimens.

“While much of the science is way over my head, I have begun to learn basic elements of gross preparation, pathology, histology and human disease,” Malikowski said. “I love going to work there. It is exciting to see connections start to build between what I learn in class and what happens in practical settings.”

Outside the classroom, as a volunteer licensed emergency medical technician with the SUNY Cortland Emergency Squad, he works an average of four to five overnight shifts a month responding to on-campus emergency calls.

“The things I have learned as an EMT, I never could have been exposed to in a classroom,” said Malikowski, who participates in Biology Club, Pre-Med Club, Habitat for Humanity and on the defending champion intramural flag football team.

“I always try to use athletics as a release from the hectic schedule of a biology student,” he said, noting he relishes playing in an annual softball game that pits biology and geology students against each other.

“Tom is not seeking the easiest academic path toward his chosen career in medicine,” observed Peter Ducey, professor and chair of the Biological Sciences Department. “Rather, he strives to learn what will prepare him best to help others. He is taking the most challenging courses and is absolutely excelling in all of them.”

The son of Joseph and Sandra Malikowski of Fredonia, N.Y., Tom graduated in 2007 from Fredonia High School, where as a senior he was awarded the school’s four-year college scholarship. He is studying at SUNY Cortland on a four-year Merit Scholarship and has received the Honors Program Achievement Award.