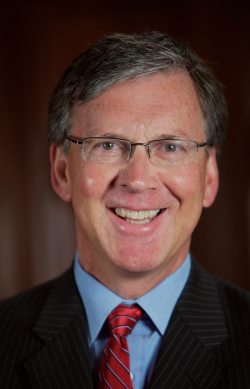 
The SUNY Cortland College Council will present its 2009 College-Community Appreciation Award to Martin J. Mack during a special invitation-only banquet on Thursday, Oct. 29, in the Corey Union Function Room.

Mack becomes the 28th recipient of the annual award established in 1985 to formally recognize and thank local residents who have significantly assisted SUNY Cortland.

Since August 2009, Mack has been New York Gov. David Paterson's appointments secretary, having been named six months earlier by the governor as his deputy secretary for intergovernmental relations. Mack had held the latter position under former Gov. Eliot Spitzer.

Prior to his service in the governor's office, Mack was deputy attorney general under Attorney General Spitzer for eight years.

As deputy attorney general and working with the SUNY Cortland administration in 1999, Mack initiated the proceeding to end the tumultuous Clayton Avenue block parties. He also partnered with SUNY Cortland to provide student interns with valuable experiences. He taught business law as an adjunct lecturer at SUNY Cortland.

Mack acquired a fondness for the College at an early age. His father, the late Joseph Mack, was a SUNY Cortland education professor for 26 years, a two-time Cortland mayor, and one of the catalysts behind the 1967 construction of the Newman Center on Calvert Street as a permanent house of worship for SUNY Cortland's Roman Catholic students. The younger Mack served on the Newman Foundation Board for many years and chaired the organization. Mack was a pallbearer at the 1999 funeral of Rev. Edward O'Heron, now the center's namesake.

In 1986, Mack was appointed to the College Council and later served as its chair. During his five-year term, he oversaw the council's participation in SUNY Cortland's yearlong 125th Anniversary celebration in 1993-94, as well as its role in the naming of the William J. Tomik '51 Fitness Facility and the John L. Sciera '52 Training Room. Mack chaired the presidential search committee that selected Judson H. Taylor as SUNY Cortland president in 1995.

He ran for Congress in New York's 25th Congressional District in 1996 and chaired the New York State Democratic Party in 1998.

Mack presently serves as Gov. Paterson's representative on the Cornell University Board of Trustees. He received his B.A. from Cornell University, an M.A.T. in Secondary Social Studies from SUNY Cortland and his J.D. from the University of South Carolina.

In 2004, during the centennial anniversary of Cortland native Alton B. Parker winning the Democratic Party presidential nomination to run against Theodore Roosevelt, Mack, the nation's foremost expert on Parker, and then-Attorney General Spitzer came to Old Main Brown Auditorium and discussed the two candidates.

More recently, Mack has been instrumental in securing key support both for the College's $51 million student life center and for the relocation of the New York Jets' summer training camp to SUNY Cortland.

He and his wife, Lee Scott Mack '01, a former assistant registrar at the College, have two children, Sarah and Brennan.