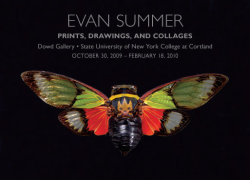 
A Dowd Gallery exhibit of recent prints and photography by Evan Summer, an internationally known printmaker and 1970 SUNY Cortland graduate, will cotinue through Feb. 18.

Summer, the recipient of many national and international awards for his artwork including the National Academy of Design’s 1999 Leo Meissner Prize for printmaking, opened the exhibit on Oct. 30 when he gave a walking tour of the exhibition, titled “Evan Summer: Prints, Drawings and Collages.”

As a SUNY Cortland alumnus in residence from Oct. 30-Nov. 3, Summer discussed his work in a lecture called “Prints, Drawings and Influences” and offered an artist’s collagraph workshop.

Selected as a SUNY Cortland Distinguished Alumnus in 2000, Summer is a professor of art on the faculty at Kutztown University in central Pennsylvania, where he has taught printmaking since 1984.

He also has instructed at the Tyler School of Art and the Pratt Graphics Center. He was admitted to the National Academy of Design in New York City in 1993 and the International Print Triennial Society in Krakow, Poland, in 1995.

The artist, who is listed in Who’s Who in America and Who’s Who in American Art, has made a name for himself creating both intaglio etchings in black ink and collages of his print images tinted in pastels and acrylics. Intaglio involves an indented printmaking process that results in lines of ink as opposed to relief printmaking, such as woodblock, in which large areas of ink form the artist’s pattern. Metal plate etching, another process he uses, dates back to the 16th century.

Summer’s consummate craftsmanship transcends the ages, but his contemporary artistic message has been exhibited in more than 100 national and international exhibitions including the Scuola Internazionale di Grafica in Venice in 2007. His work appears in distinguished, permanent collections across the United States, including the National Gallery of Art, the Metropolitan Museum of Art, the Corcoran Gallery of Art, the Brooklyn Museum, the Pennsylvania Academy of the Fine Arts, the Philadelphia Museum of Art and the National Museum of American Art.

A native of Williamsville, N.Y., Summer graduated from Amherst High School and was a chemistry major at SUNY Cortland. Strongly influenced by Professor Emeritus of Chemistry Peter Jeffers, his elective courses included art classes taught by Associate Professor Emeritus of Art George Atcheson and the late Professor of Art Gerald DiGiusto. He has an M.F.A. in printmaking from Yale University.

PHOTO
Photograph by Evan Summer, “Salvazano Imperialis,” made in 2004.