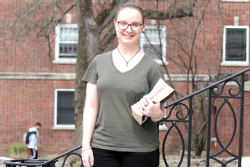 
Jessica Goon is accustomed to the glances.

Walking around campus, she is often toting her dog-eared copy of the Domesday Book, which has 1,301 pages of text and hundreds of pink and yellow post-it notes poking out the sides.

“Every time I carry this book around campus, I get so many questions about what it is and what I’m doing,” she said.

Goon, a senior archaeology major and history minor from Vestal, N.Y., can’t wait to tell everyone what she’s been working on at Transformations: A Student Research and Creativity Conference, on Friday, April 12.

The Domesday Book was a comprehensive survey of English property ownership that was commissioned by William the Conqueror in 1086. When the book was translated from Latin to English in the 19th century, the Victorian culture of the translators, particularly when it came to gender roles, led to an underestimation of the role of women as property owners in medieval times.

Goon will talk about her research, which involved going through those 1,301 pages line-by-line to search for pronouns and other indicators that point to female landowners who were overlooked or underrepresented.

Her analysis of women in the Domesday Book aims to inspire others to reexamine the way we interpret history.

“I’m really hoping this starts a conversation about taking old historical analysis for granted,” Goon said. “What happens is, we take these analyses that male historians did in the 1700 and 1800s and that’s still what we’re talking about rather than looking at it from a modern perspective and including the people who were excluded, whether it’s women or illiterate groups, because many times they were also excluded.”

Laura Gathagan, an associate professor in the History Department, approached Goon about working on this project as part of the Undergraduate Research Council’s Summer Research Fellowship. Goon spent eight weeks during the summer of 2018 conducting her research and the two also traveled to England in January 2018 to see in person some of the sites mentioned in the Domesday Book.

In addition to searching for contextual clues, Goon is mapping plots of land owned by Mathilda of Flanders, wife of William the Conqueror and Queen of England between 1066 and 1083, using Geographic Information System (GIS) software. Gathagan, whose own research is focused on the life of Mathilda of Flanders, was thrilled to see Goon expand the scope of this project to investigate the role of all of the women mentioned in the text.

“She’s expanding this her own way and looking at women who aren’t Mathilda but who are also important and just as central to understanding the Middle Ages and how women are folded in to this militaristic, land-based society,” Gathagan said. “She’s taken it in a different direction that’s exciting and important to her. Undergraduate research is so key for students to make their education their own and she’s done that.”

Goon is simultaneously working on a tangential topic for her honors thesis, the intersection of gender roles and clerical celibacy and its impact on American society. Her background in archaeology, anthropology, history and geography have helped give her a unique approach to her studies.

Research, however, wasn’t on Goon’s radar early in her academic career at SUNY Cortland. She’s glad to have had the opportunity because she knows it will help her in whatever she does once she leaves campus.

“When I came here, I thought I’d be doing archeology and digging in the dirt,” she said. “But once I really got more into history and connected with Doctor Gathagan, I got really excited about research and now it’s one of my favorite things to do. It’s helped me with pretty much anything I might do in the future because it’s given me not only the actual research experience, but it’s also given me basic skills like patience and those sorts of things. Doing research is just really fulfilling and I really enjoy it now.”

Gathagan has been equally energized by this project. Connecting students to primary sources and seeing them grow as researchers is one of her most rewarding experiences as a professor.

“To have somebody like Jess who makes history her own and internalizes it is fantastic,” she said. “It’s so fulfilling and so amazing. I think to myself, ‘This is why I teach college.’ This work lights me on fire. If I can find somebody else who gets lit on fire by this, it’s like having a soulmate. They turn into your colleague. She and I can sit down and talk about things like no one else could.”

Goon is planning to pursue a master’s degree in museum studies after graduation. She works as an intern in the College’s Rozanne M. Brooks Museum and visited a number of museums during her recent trip to England, both of which have inspired her career goals.

Most of all, she sees museums as places that keep history alive and also allow for new interpretations of the historical record. The field will allow her to follow her passion for research and how it can best be presented.

“I think of museums as supplemental education for the public,” Goon said. “A lot of people don’t like learning history in a classroom setting so if museums can provide a more exciting space for people to learn about history and what our past was, that’s something really important to focus on.”