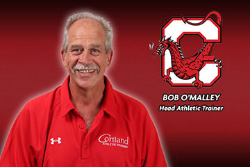 "We're excited about our new addition to Cortland Athletics in the area of Athletic Training and student athlete safety and well-being," said Urtz. "It has never been more paramount for universities to continue to enhance these areas. Bob brings vast experience in this area, which will only improve our top-level program of athletic training. Bob’s addition to an already elite group will put us among the best.

"We also want to thank Sonya for her 14 years of outstanding service as head athletic trainer for us. Fortunately for us, she plans to remain on staff as one of our full-time certified athletic trainers along with her continued responsibilities for the program in the classroom."

O'Malley most recently worked since 2009 as an athletic trainer for Excelsior Orthopedics and Sports Medicine in Amherst, N.Y. He served as Coordinator of Community Outreach, and from 2015-17 was Coordinator of Sports Medicine Services for the WNY Flash Women's Soccer Team, the 11 Day Power Play Foundation (an annual marathon hockey game to raise money to fight cancer), and the Buffalo Marathon Stretch Zone, among other groups.

No stranger to intercollegiate athletics, O'Malley served as head athletic trainer and assistant director of athletics at Philadelphia University from 1993-2006. He administered the overall athletic training/sports medicine program for the university and supervised a staff that included an assistant athletic trainer, 10 student trainers, two PA/ATC graduate students, and Temple University CAAHEP Athletic Training Education Program students. He also was an assistant athletic trainer at Marist College from 1988-90, and from 1993-2006 was an approved clinical instructor at Temple University, where he supervised and evaluated undergraduate students in the Athletic Training Education Program.

O'Malley graduated from American International College in Springfield, Mass., in 1979 with a bachelor's degree in pre-law/history and a minor in biology. He was a graduate student at Concordia University in Montreal, Quebec, in 1981, and he earned a master's degree in athletic training/sports medicine from Temple University in 1993.