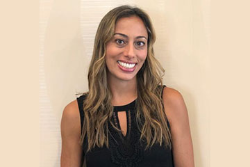 Zaug, who earned a bachelor’s degree in outdoor recreation from Cortland in 2000 and a master’s degree in recreation management from the College in 2002, replaces Sierra Day, who served as interim head coach during the 2018-19 season.

“It is such an honor and unique responsibility to be able to coach a sport that I love, that framed my childhood and brought me so much success at my alma mater,” said Zaug. “Cortland is in my blood. I feel like I’ve come home during every visit since graduation. I am so excited to help motivate our student-athletes to become the best they can be in the gym, as Red Dragons, and in life.”

Zaug was a three-time national champion on uneven bars in 1997, 1998 and 2000 and finished second nationally in the event in 1999. She was the first gymnast in the history of the National Collegiate Gymnastics Association (NCGA) to win three individual national titles in the same event. Her score of 9.80 on bars during her a regular-season meet in her senior year held up as a school record for 18 years before being eclipsed during the 2017-18 season.

In addition, Zaug earned first team All-America honors with a fifth-place national finish on balance beam in 1997 and a fourth-place showing in the all-around in 2000. On the regional level, Zaug won ECAC titles on uneven bars in 1997 and 1999 and was a four-time All-ECAC performer in the event with top-six finishes.

She was inducted into the NCGA Hall of Fame in 2018 and is one of only two Red Dragons, to date, to achieve that honor. A team captain during her senior year, Zaug was an NCGA All-Academic Team member and earned Dean's List honors at Cortland multiple times. She also initiated and coached the first SUNY Cortland women’s gymnastics club team.

A Queens native, Zaug has served as head gymnastics coach for the Kennetts Gymnastics School in Goshen, as well as the nationally ranked Flushing YMCA team levels 8, 9 and 10 for nearly a decade.

Zaug served as the Director of Recreation at Glen Arden Retirement Community in Goshen from 2017-19. She was the Engage Life Director for Atria Senior Living in Ossining from 2012-17 and the Director of Recreation for Wingate Healthcare in Fishkill from 2007-12. She went on to become a leader in the field of activity professionals, becoming the New York State representative and presenting each year at the New York State Health Facilities Organization (NYSHFA) annual conferences.

"We welcome back Sulekha to our Cortland Athletics family,” said Urtz. “She knows what it takes to reach the greatest heights in gymnastics, and I look forward to seeing our program continue to grow under her guidance.”